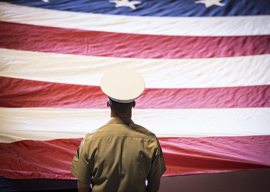 I recently had a spirited discussion with the British historian James Holland, brother of Tom Holland, also a distinguished man of letters, about FDR, his oil embargo of Japan, and the root causes of WWII. We were in Normandy, inspecting the battle scenes of D-day, with James giving us the kind of briefings reserved for the top brass, and then some.

Billeted at the Ch”teau de Pully, where the German High Command lived the high life before June 6, we somehow got into a discussion about Japan and FDR, and with the help of a lot of wine, things got a bit heated. “Who the hell was Roosevelt to tell the Japanese what to do and impose an oil embargo?” said yours truly. “And who the hell was Bush to invade Iraq and kill half a million Iraqis as a result?” I continued. “Why do you Americans think you can run other peoples’ lives and order them about?” “I’m an Englishman,” came the dry riposte from James Holland, so I shut up.

Although I’m as American as olive oil and feta cheese, I am not the type to blame Uncle Sam for the state of the world, but time after time try to remind readers that no one has done more to help humanity than the old uncle himself. Except that his well-meant interventions more often than not have unintended consequences. Take the recent remarks by our latest secretary of state, Mike Pompeo, about Iran: twelve tough demands that include opening all military sites to full inspections and ending ballistic-missile tests. (To his credit, he didn’t demand they shave their beards.)

Plus ending all its nuclear enrichment programs, closing its heavy-water reactor, and ceasing its support of “terror” groups—my quotes—as well as the campaign of aggression against Israel. Ah, Israel. This poor little country that’s bullied by Iran and Yemen and Syria and Lebanon and most of all by Palestine. A country that is as strong as America and as big as Russia and China put together.

“The old uncle’s well-meant interventions more often than not have unintended consequences.”

The one Pompeo line I liked the most was when he demanded that Iran withdraw its forces from Syria, especially coming from the No. 1 diplomat of a country that does not have a single soldier based in a foreign country anywhere in the world. Mamma mia, what is going on here? I’ll tell you what, and it ain’t pretty, as they say: Since 2015, 10,000 Yemeni civilians have been killed by the indiscriminate bombing of the Saudi-led coalition begun with President Obama’s backing. Millions are on starvation diets, and thousands of children have died of malnutrition as the nice Saudis are using starvation as a weapon since their American-enabler-supplied superweapons did not manage to wipe out the Houthi opposition.

The Saudis would have quit long ago—they are not used to fighting except when they beat up women in various flesh spots around the world—had Uncle Sam not provided them with air-to-air refueling, arms, intelligence assessments, and other military advice. Mind you, Mike is right. The Houthi rebels are supported by Iran, or so Israeli intelligence tells us, and the Israelis would never lie about something like that. Houthis are Shiites, like the Iranians, but that doesn’t give the Persians the right to help them. Only Israelis have the right to help fellow Jews, no one else.

Make no mistake about this. Sooner rather than later, Israel is going to go after Iran in Syria with the help of Uncle Sam after discovering a plot to nuke Tel Aviv, or something just as outrageous. Since 2012, Israel has launched more than 100 strikes on Syrian convoys, but somehow the world’s media has failed to report them. It’s direct war, and America, Saudi Arabia, and Israel are the troika that is out for regime change in Tehran. Trump’s tearing up the treaty was just the diversion provided on stage while the big act is getting ready on the sidelines.

The heads of Mossad and of Israel’s military intelligence have been visiting Washington, preparing for war. Now that John Bolton is in place, things should loosen up and allow Netanyahu to be Netanyahu, i.e., to attack Syria and Iranian bases in that country while involving Uncle Sam in the process. After all, the good uncle is there for just that, helping out the poor and the weak against the bullies.

When The Donald pledged to drain the Washington swamp, little did he know that the swamp consisted of the Israeli and Saudi lobbies—or did he? Neither country will fight unless Uncle Sam is behind them all the way. Think about it, all you Americans out there; you fought two world wars and countless smaller conflicts in order to be strong enough to protect the weak and the poor, such as Israel and Saudi Arabia. Doughboys, G.I. Joes, grunts, feel proud of your sacrifices. Billionaires in Tel Aviv and billionaires in Riyadh will thank you one day soon. But don’t hold your breath.