Interview With a Drug Casualty 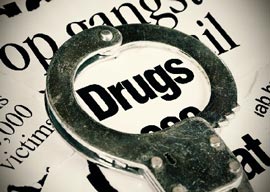 Of the 2.2 million Americans in prison right now, about half are there for drug-related offenses. It’s a tricky number to determine because felonies such as murder, assault, burglary, arson, robbery, and even kidnapping can still be linked to the drug war. The Bureau of Justice Statistics claims, “Between 2001 and 2013, more than half of prisoners serving sentences of more than a year in federal facilities were convicted of drug offenses.”

There are no prominent right-wing politicians today condoning legalization, but can we at least start with pot? Making teenagers play videogames for hours and laugh too hard at late-night comedies should not lead to prison. How can the downsides of this insidious drug (and it is ultimately pretty bad for you) hold a candle to the intense casualties of this ridiculous war? Take my friend Paul (nÃ© Pawel Urbaniak), for example. He’s a white ex”pot dealer from Long Island with a thick New York accent, Drake hair, basketball shoes, and a baseball hat at a slight angle. He’s 28 now, but he’s still 22 in a lot of ways. That’s because he just got out of prison after six years for assault and battery”only that’s not what happened.

“Can we at least start with pot? Making teenagers play videogames for hours and laugh too hard at late-night comedies should not lead to prison.”

Gavin McInnes: So what happened?

Paul: I went to buy a pound and a half of pot from my supplier and he tried to rob me with a knife so I kicked the shit out of him.

Did he suffer any permanent damage?

Yeah, he had to go to the hospital and he has scars and stuff.

They don”t, but I got six years for his word against mine. He was a cop’s brother.

Weren”t his fingerprints on the knife?

He didn”t call the cops for an hour. The knife was long gone at that point and the scene was cleaned up. I”m telling you, they were like professionals.

What did he say happened?

He said he was trying to buy an ounce from me but I beat him up and stole $400 from him.

Here’s what bothers me about your case: If this were any other industry, you could show a track record of you buying one and a half pounds at a time. Your customers could vouch for that amount of business and it would all be verifiable. Then the jury could see that guys who have been successfully selling that amount for that long would have no reason to fake an ounce sell to steal $400.

There’s just no evidence. I”ve been going over my trial minutes and I haven”t given up. One juror said “not guilty” when they were going through the initial verdict and she got hassled by the prosecutor until she changed her verdict. I think I”d have a chance for a mistrial through that.

Do you think you got six years because his brother was a cop?

How did you not go insane in there? I”d be plotting revenge murders the entire time.

My family was always there for me. They visited me regularly. They had my back from the very beginning and they still do today.

That’s huge. Outside of the drug war, we”ve incentivized single parents with welfare and that has shattered the black family.

I”m not being racist. In many ways, blacks were better off when racism was worse. Allan West recently wrote, “As early as the 1880s, three-quarters of black families were two-parent.” In the Bronx today, 70 percent of kids grow up fatherless.

I don”t know those statistics. That must include a lot of Hispanics, though. I mean, when you look around the yard, there are definitely more blacks than whites, but there are also a ton of Hispanics. It was very segregated in there. White guys hang with white guys and blacks hang with blacks. It’s also very hostile.

So you got more visits than blacks and Hispanics?

I don”t know about that.

Can you just say that? Because it’s kind of my whole hypothesis here.

I said I don”t know. I can say that if I didn”t have my family, I”d be more likely to get into trouble again. I”m living with them right now. Where would I stay otherwise? How would I get an apartment?

How do you get laid on parole?