Is a Left-Right Antiwar Coalition Possible? 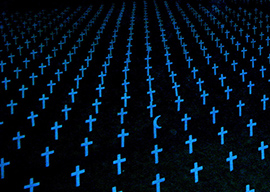 In The American Conservative‘s September issue, spirited libertarian journalist and antiwar.com editor Justin Raimondo offers his opinions about how Obama lost the left. Raimondo says much of Obama’s support among journalists and intellectuals came from opponents of the Bush Administration’s military adventures. In the 2008 Democratic primaries, Obama rode his unyielding opposition to the Iraq War to national visibility, distinguishing himself from rival Hillary Clinton as someone who had consistently voted against war appropriations.

But since becoming president, Obama has traded his antiwar hat for a military one, backing a heightened American military presence in Afghanistan. While this has brought Obama limited support from neoconservative journalists and hawkish Republicans, it has cost him dearly among his hardcore leftist backers. Democrats such as Russ Feingold and Howard Dean are now looking for ways to turn their antiwar stance into a national political issue.

Allegedly this stance coincides with what the old right and libertarians have been saying for years. Ron Paul’s presidential candidacy represented an antimilitarism similar to what is emerging on the anti-Obama left. Given these shared interests, Raimondo concludes it would be natural for the antimilitarists of right and left to ally against the Obamaites and neoconservative Republicans. Such an apparently unlikely union does have precedents. It can draw on the antiwar, isolationist alliances of right and left that took place in the 1930s and during the Vietnam War, although briefly and less effectively. Why couldn”t the two sides, asks Justin, unite again in an antiwar front?

Here’s why I think such a project is pie in the sky. There is no evidence that a sizable segment of Obama’s constituency is deserting him because of American military involvement in Afghanistan. In fact, most of the Democrats” antiwar propaganda during the Bush Administration was partisan hot air that greatly diminished once the Democrats seized power. With few exceptions, the Democrats did not entirely condemn Bush’s military involvement”only the unnecessary war in Iraq as opposed to the supposedly necessary one in Afghanistan.

“The war is not as critical an issue for most of the Democratic left as, say, gay rights or amnesty for illegals.”

Candidates Obama and Biden were explicit in 2008 about supporting a war that they and almost all Democrats in Congress are still backing. Obama’s endorsement of continued American military action in Afghanistan was not even a noticeable issue in this November’s election. Voters were preoccupied with matters other than what might interest readers of TAC or antiwar.com. Justin should not mistake his libertarian opposition to war for a national consensus.

The antiwar right already tried forming a left-right coalition throughout the Bush years, with very meager results. Despite the strenuous efforts of TAC and other organs of the non-neocon right to encourage bridge-building with the antiwar left, this outreach never amounted to a hill of beans. This lack of results is all the more striking inasmuch as TACrepeatedly invited left-wing opponents of the Bush presidency to write for it. The magazine often published material that looked as if it were coming from the far left. But the left continued to keep its distance from TAC, and the media in general rarely mentioned anyone on the right (except Pat Buchanan) as a noteworthy opponent of the war.