Is a Trump-Putin Detente Dead? 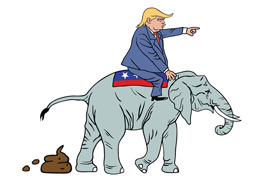 Among the reasons Donald Trump is president is that he read the nation and the world better than his rivals.

He saw the surging power of American nationalism at home, and of ethnonationalism in Europe. And he embraced Brexit.

While our bipartisan establishment worships diversity, Trump saw Middle America recoiling from the demographic change brought about by Third World invasions. And he promised to curb them.

While our corporatists burn incense at the shrine of the global economy, Trump went to visit the working-class casualties. And those forgotten Americans in Pennsylvania, Ohio, Michigan and Wisconsin, responded.

And while Bush II and President Obama plunged us into Afghanistan, Iraq, Libya, Yemen, Syria, Trump saw that his countrymen wanted to be rid of the endless wars, and start putting America first.

He offered a new foreign policy. Mitt Romney notwithstanding, said Trump, Putin’s Russia is not “our number one geopolitical foe.”

Moreover, that 67-year-old NATO alliance that commits us to go to war to defend two dozen nations, not one of whom contributes the same share of GDP as do we to national defense, is “obsolete.”

Many of these folks are freeloaders, said Trump. He hopes to work with Russia against our real enemies, al-Qaida and ISIS.

“But how does a president negotiate a modus vivendi with a rival great power when the leaders of his own party are sabotaging him and his efforts?”

This was the agenda Americans voted for. But what raises doubt about whether Trump can follow through on his commitments is the size and virulence of the anti-Trump forces in this city.

Consider his plan to pursue a rapprochement with Russia such as Ike, JFK at American University, Nixon and Reagan all pursued in a Cold War with a far more menacing Soviet Empire.

America’s elites still praise FDR for partnering with one of the great mass murderers of human history, Stalin, to defeat Hitler. They still applaud Nixon for going to China to achieve a rapprochement with the greatest mass murderer of the 20th century, Mao Zedong.

Yet Trump is not to be allowed to achieve a partnership with Putin, whose great crime was a bloodless retrieval of a Crimea that had belonged to Russia since the 18th century.

The anti-Putin paranoia here is astonishing.

That he is a killer, a KGB thug, a murderer, is part of the daily rant of John McCain. At the Munich Security Conference this last weekend, Sen. Lindsey Graham promised, “2017 is going to be a year of kicking Russia in the ass in Congress.” How’s that for statesmanship.

But how does a president negotiate a modus vivendi with a rival great power when the leaders of his own party are sabotaging him and his efforts?

As for the mainstream media, they appear bent upon the ruin of Trump, and the stick with which they mean to beat him to death is this narrative:

Trump is the Siberian Candidate, the creature of Putin and the Kremlin. His ties to the Russians are old and deep. It was to help Trump that Russia hacked the DNC and the computer of Clinton campaign chief John Podesta, and saw to it WikiLeaks got the emails out to the American people during the campaign. Trump’s people secretly collaborated with Russian agents.

Believing Putin robbed Hillary Clinton of the presidency, Democrats are bent on revenge—on Putin and Trump.