Is a U.S. Default Inevitable? 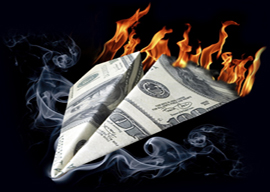 As President Bush prepared to invade Iraq in September 2002, the head of his economic policy council, Lawrence Lindsey publicly estimated such a war could cost $100 billion to $200 billion.

Lindsey had committed candor, and the stunned Bushites came down on him with both feet.

“Baloney,” said Donald Rumsfeld. The likely cost would be $60 billion, said Mitch Daniels of the Office of Management and Budget. We can finance the war with Iraqi oil, said Paul Wolfowitz.

By year’s end, Lindsey was gone, back, in Ronald Reagan’s phrase, “testing the magic of the marketplace.”

And the cost of the Iraq War? It has passed $1 trillion.

So Lindsey is worth listening to. And he is now saving that the Obamaites may be wildly underestimating the deficits America is going to run in this decade. Here is why.

The average rate of interest the Fed has had to pay to borrow for the last two decades has been 5.7 percent. However, President Obama is projecting the cost of money at only 2.5 percent.

A return to the normal Fed rate would, by 2020, add $4.9 trillion to the cumulative deficit, says Lindsey, more than twice the $2 trillion in savings being discussed in Joe Biden’s debt-ceiling deal.

“Is America then headed for an inevitable default?”

Hence, if we return to a normal rate of growth, rather than rise to Obama’s projected rate, says Lindsey, that would add $700 billion to the deficit over the next three years and $4 trillion by 2020.

Taken together, a U.S. return to a normal rate of growth of 2.5 percent, higher than today, and a normal rate of interest for the Fed could add as much as $9 trillion to the deficits between now and 2020.

New taxes on millionaires and billionaires who ride around in corporate jets can’t cover a tenth of 1 percent of these deficits.

Writes Lindsey, “Only serious long-term spending reduction in the entitlement area can begin to address the nation’s deficit and debt problems.”

His conclusion is logical, but seems impossible to achieve when both parties are talking of taking Medicare and Social Security off the table. Which makes his final point all the more compelling:

“Under current government policies and economic projections, (bondholders) should be far more concerned about a return of their principal in 10 years than about any short-term delay in interest payments in August.”