Is Allah an LGBT Ally? 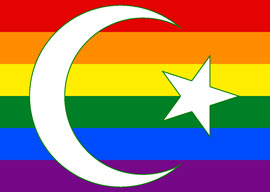 During homo-slaughtering Islamist gunman Omar Mateen’s rainbow bloodbath at Orlando’s Pulse nightclub on June 12, he reportedly called 911 to pledge his support to ISIS. In appreciation, an “ISIS-affiliated media group” dubbed Mateen a “lion of the caliphate” for slaughtering “infidels” in such spectacular numbers.

Still, hours after the shooting, Mateen’s father swore to NBC News that the attack “had nothing to do with religion.” But the day after, he posted on Facebook that “God will punish those involved in homosexuality.”

In the media eruption that followed the shooting, a scantly reported fact has been that in March, a British-born imam gave a speech at an Orlando mosque urging the death penalty for homosexuals: “Out of compassion, let’s get rid of them now.”

The Council on American-Islamic Relations (CAIR)”basically the USA’s Muslim public-relations Mafia”condemned the sodomitical nightclub mass murder and urged unity among “all communities who are victims of violence and persecution in our country.” The head of CAIR’s Florida chapter, Hassan Shiply, claimed that his heart bled with “overwhelming love and support for the LGBT community””this, despite his 2009 proclamations that homosexuality is “evil” and “a quick way to earn God’s wrath.” Other CAIR speakers have called homosexuality a “disease,” advocated for the death penalty against gays, and threatened to burn down a proposed gay-friendly mosque in Toronto, but these facts were mostly kept out of the news.

“Despite all those gallons of blood, these suicidal zombies persist in the delusion that their Big Stupid Rainbow has enough room to cram the muzzies and the queers together without a hint of trouble.”

But despite ample evidence that Islam’s tentacles were all over the Orlando attack, much of the progressive media turned the focus to guns and homophobia. This was not Islamic terrorism, they insisted, it was an NRA-enabled hate crime against gays. (In case you didn’t realize it, the NRA is a powerful lobby”obviously more powerful than a nuke-owning government that’s trying to take away guns in their full-court press toward globalism.) Anyone who suggested that it had anything to do with Islam was quickly derided and shamed…or even censored. In the hours after the attack, moderators at Reddit reportedly deleted any posts that mentioned either Mateen’s name or an Islamic connection to the shooting.

US Attorney General Loretta Lynch”whose main concern in the wake of the Islamist-inspired San Bernardino mass murder last fall was that it would lead to “anti-Muslim rhetoric””has upped the Orwellian ante this time around by promising to release Mateen’s 911 call transcripts with all of his references to ISIS and the Boston Marathon bombers carefully excised.

The message is as clear as a muezzin’s call to prayer: Even though 2015’s Charleston shooting had everything to do with the Confederate flag and white nationalism, the Orlando gay massacre had absolutely nothing to do with the Religion of Peace, and you’re a Confederate-flag-waving hillbilly Islamophobic closet homo for even attempting to conflate the two.

Despite all those gallons of blood, these suicidal zombies persist in the delusion that their Big Stupid Rainbow has enough room to cram the muzzies and the queers together without a hint of trouble.

What does Allah have to say about all this?

The Quran repeatedly condemns the “the people of Lut” (AKA the biblical perverts whom Lot left behind in Sodom) that Allah annihilated during one of his infamous temper tantrums:

…for ye practice your lusts on men in preference to women: ye are indeed a people transgressing beyond bounds…. And the answer of his people was only that they said: “Drive them out of your town….And we rained down on them a shower (of brimstone)…”
“Quran (7:80-84)

In the supplementary Islamic texts known as the Hadith, Muhammad prescribes death for homosexual behavior:

Whoever is found conducting himself in the manner of the people of Lut, kill the doer and the receiver.
“al-Tirmidhi, Sunan 1:152

When a man mounts another man, the throne of God shakes.

But despite that curious exception for homosexual pedophilia, early Islamic leaders and scholars were nearly unanimous in their encouragement of the death penalty for faggin’ off. Muhammad’s direct successor Abu Bakr was said to have forced a male fancy-boy to be burned at the stake. Islam’s fourth caliph ordered a suspected rump-wrangler to be tossed to his death from a mosque’s minaret. And early Quran scholar Abd Allah ibn Abbas (619-687 AD) strongly suggested that after male gaybirds were thrown from tall buildings, they should also be stoned after they hit the ground just in case the fall didn’t kill them.