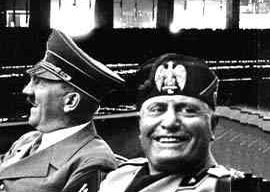 Fascism is presumed to be intrinsically and violently anti-Semitic, and the fascists wanted to exterminate the Jews, right? Wrong. That was the National Socialists.

The German historian and journalist Emil Ludwig, who wrote a fascinating book about Mussolini in 1932 based on a series of lengthy interviews with Il Duce, noted:

Undoubtedly, no contemporary Englishman or Russian had so much sympathetic understanding of the Jews, as Mussolini with me in 1932.

Ludwig, whose original surname was Cohn, was Jewish and he wrote those words in 1946 in the introduction to a new edition of his book Talks With Mussolini. In other words, he wrote them with hindsight: World War II was over and the Holocaust’s horrors had been revealed.

It was only after Italy’s fatal coupling with Nazi Germany in the late 1930s that Italian fascism became anti-Semitic, but even then it had no plans to exterminate the Jews. Until then, Italy’s 50,000 Jews were well integrated and many senior fascists were Jewish.

Margherita Sarfatti, Mussolini’s principal mistress until the 1930s, was Jewish. The daughter of a wealthy Venetian family, Sarfatti had met Mussolini in Milan before World War I when he was revolutionary socialism’s rising star. She wrote articles about art for the Socialist Party’s newspaper Avanti!, which Mussolini edited.

She followed him when Mussolini abandoned the Italian Socialist Party in 1914. But he didn”t abandon socialism, because the party wanted Italy to remain neutral, which he realized would force it to be a bystander rather than a protagonist. And when he founded fascism as an alternative left-wing revolutionary movement in 1919, she became one of its chief propagandists, writing the first biography of him after his seizure of power in 1922. Titled DUX in Italian, this brilliant but sycophantic book was published first in English in 1925 and became an international best-seller translated into 20 languages.

“Italian fascists were no more or less anti-Semitic or racist than Europeans in general of their day.”

Italian fascists were no more or less anti-Semitic or racist than Europeans in general of their day.

In 1920 Winston Churchill wrote an article in the Illustrated Sunday Herald about three types of Jew”two good, one bad””National” Jews who were patriotic, “Zionist” Jews who wanted to create Israel, and “International” Jews, who included Russia’s communist leaders and were bad because they were behind “a world-wide conspiracy for the overthrow of civilization.”

Until Mussolini teamed up with Hitler in the late 1930s, there was nothing about Italian fascism that could be construed as unusually anti-Semitic. To the same Ludwig in 1932 Mussolini had also said:

Of course there are no pure races left; not even the Jews have kept their blood unmingled. Successful crossings have often promoted the energy and the beauty of a nation. Race! It is a feeling, not a reality; ninety-five percent, at least, is a feeling. Nothing will ever make me believe that biologically pure races can be shown to exist today. Amusingly enough, not one of those who have proclaimed the ‘nobility’ of the Teutonic race was himself a Teuton….Anti-Semitism does not exist in Italy. Italians of Jewish birth have shown themselves good citizens, and they fought bravely in the war.

Yet in September 1938, at the same time that Mussolini was being heralded as the angel of peace as a result of the Munich Agreement, which was supposed to guarantee “peace in our time,” he introduced anti-Semitic laws to Italy.

Whereas German National Socialism had always been anti-Semitic, Italian fascism had not. Nor was it inevitable that Nazi Germany and fascist Italy, despite a shared hatred of capitalism and communism, should become military allies. Au contraire. Hitler’s annexation in March 1938 of Austria”which borders Italy and gives access to the Balkans”outraged but also scared Mussolini. Yet his own 1935 invasion of Abyssinia had caused a dangerous deterioration in his relations with Britain and France, causing him to seek advantage elsewhere.

The tightening bonds between the Nazis and Italy’s fascists were not the reason why Mussolini introduced his anti-Semitic laws, but they were the catalyst.