Is it a Hate Crime to Call Madonna a Shriveled-Up Old Hag? 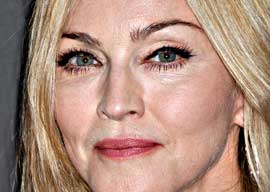 Geriatric whore Madonna, that Italian slut who sucked and fucked her way to the top of the pop charts sometime wayyyyy back in the early 1980s and has been pooping out hits ever since, fell flat on her 56-year-old ass last week during a performance at the Brit Music Awards. This rapidly led to several cruel variations of “I”ve fallen and I can”t get up!“ jokes on social media.

After carefully adjusting her hearing aid, swallowing her water pills, fastening her colostomy bag, and arriving late for an interview on her Rascal Electrical Scooter, Madonna accused her tormentors of engaging in “ageism,” which she likened to racism and homophobia.

To be fair, the bloated, liver-spotted, stretched-out, rapidly dying hag has a point. The official rules dictate that we are no longer permitted to mock, discriminate against, or tell jokes about anyone due to their “innate” characteristics, with one stark exception”those who are advanced in years. The normal argument against such bugaboos as “hatred” and “bigotry” is that no one has a choice to be black. They also try to argue that no one has a choice whether to be gay, but that’s a whole “nother article. Yet one definitely has no control over what year they were born. In that sense, it’s as bad as being black.

However, the young”uns these days have no qualms about mocking the elderly, the near-elderly, and anyone at least a year or two older than they are. And they do it in ways that would be considered unforgivably hateful if directed against, say, a gay black midget. Hating people merely because they plopped out of their mother’s punani a dozen or more revolutions around the sun before you did is not only tolerated among the young”it often seems to be encouraged. We witness endless torrents of scalding verbal acid flung at “old white men” whose demographic demise is celebrated as a historical inevitability and a triumph of justice rather than, say, some kind of quietly orchestrated genocide.

I suspect this has something to do with a super-secret plot by the Powers That Be to manipulate one generation into revolting against the idea of paying the pensions and medical bills of another generation, but I have no evidence to support that suspicion, so I”ll leave it at that. You can chew on that matzo ball at your leisure and discretion.

I was at a dance club in London in the summer of 1985″shut up, I wasn”t there for the music or the dancing, I was trying (and failing) to get laid”when a DJ announced a new Madonna record by predicting that the quite possibly herpetic songstress was going to be a star for a long, long time.

Unfortunately, the British DJ was correct. She’s been around a long, long time. It’s almost as if we can”t get rid of her. But as with so many of the aged and infirm, her longevity is now being used against her as if it were a character flaw. In Madonna’s case, though, it’s a sign of a remarkably shrewd businesswoman’s steel-vulva”d persistence.

There was a point around when she first became a star when it occurred to me that people such as Madonna and Mick Jagger”musical performers whose careers depended much more on their sex appeal than any innate musical talent or virtuosity”would at some point be forced to fade away from the spotlight lest all the flashbulbs catch their deepening wrinkles.

At age 32, Mick Jagger famously told People magazine, “I would continue to write and sing, but I”d rather be dead than sing “Satisfaction” when I”m 45.”

He’s 71 and still singing it. Probably even still sings it in the shower. And it’s not inconceivable that one day Madonna will be singing “Like a Virgin” while undergoing kidney dialysis.