Is Obama Leaving the Left Behind? 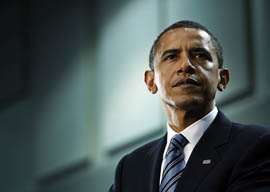 The day that President Obama departed for Arizona to address the nation on the Tucson massacre, Washington was abuzz.

Would he take the line of the hard left and call out the right for having created what columnist Paul Krugman called the “Climate of Hate” in which a mentally deranged Jared Lee Loughner had acted?

Would he lay moral responsibility for the slaughter at the feet of Fox News and Sarah Palin, as the wilder voices of the left have been doing nonstop since Saturday’s shocking news?

Obama did the opposite, admonishing his allies as well as critics, “at a time when we are far too eager to lay the blame for all that ails the world at the feet of those who think differently than we do, it’s important for us to pause for a moment and make sure that we are talking with each other in a way that heals, not a way that wounds.”

Again and again, he returned to the theme. “Bad things happen, and we must guard against simple explanations in the aftermath.

“For the truth is that none of us can know exactly what triggered this vicious attack. None of us can know … what thoughts lurked in the inner recesses of a violent man’s mind. … But what we cannot do is use this tragedy as one more occasion to turn on each other. …

“If this tragedy prompts reflection and debate … let’s make sure … it’s not on the usual plane of politics and point-scoring and pettiness.” No “lack of civility … caused this tragedy.”

Obama thus cut the ground out from under those exploiting the massacre and attempted murder of Rep. Gabrielle Giffords to smear and exact retribution for the crushing repudiation they suffered on Nov. 2.

In one of the finer speeches of his career, Obama realized that, at this hour and in this tragedy, his country yearned to come together on the higher ground of grief for the fallen, celebration of those who behaved bravely and prayerful hope for the wounded.

“This is a fellow with an almost Nixonian capacity for maneuver. “

By rising above “politics and point-scoring and partisanship” in Tucson, the president has recaptured some of the luster he had lost since that January two years ago.

The speech in Tucson confirms what seemed a month ago to be a conscious decision by the president to effect a course correction in his presidency after the “shellacking” in November.

The decisive moment came when the left was loudly demanding that he fight to the last ditch for repeal of the “Bush tax cuts for the rich,” even if it meant the lame-duck session of Congress ended in a dead-duck session.

Instead, recognizing Sen. Mitch McConnell’s Republicans not only had the votes but the will to block any action in the Senate before the GOP took over the House in January, Obama shoved aside Nancy Pelosi and Harry Reid, and moved to cut a deal with the GOP.