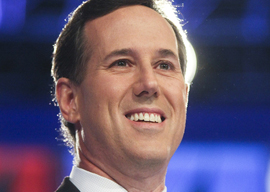 The political beliefs of Barack Obama, said Rick Santorum last week, come out of “some phony theology. … Not a theology based on the Bible, a different theology, but no less a theology.”

Given the opportunity on “Face the Nation” to amend his remarks, Santorum declined the offer and plunged on:

“I don’t question the president’s faith. I’ve repeatedly said that I believe the president is a Christian. He says he is a Christian. I am talking about his worldview and the way he approaches problems in this country. … They’re different than how most people do in America.”

Obama’s surrogates on the Sunday shows charged Santorum with questioning the president’s faith.

Not exactly. What Santorum is saying is that in the struggle for the soul of America, though Obama may profess to be, and may be, a Christian, he is leading the anti-Christian forces of what Pope Benedict XVI has called “radical secularism.”

In Plano, Texas, last week, Santorum was even more explicit:

“Santorum seems to want to steer his primary and general election campaign into a conflict that goes back deep into American history and has surfaced time and again.”

“They (the Obamaites) are taking faith and crushing it. Why? Why? When you marginalize faith in America, when you remove the pillar of God-given rights, then what’s left is the French Revolution. … What’s left in France became the guillotine.

“Ladies and gentlemen, we’re a long way from that, but if we … follow the path of President Obama and his overt hostility to faith in America, then we are headed down that road.”

Santorum is saying that where Thomas Jefferson attributed our human equality and our right to life and liberty to a Creator, secularism sees no authority higher than the state. But what the state gives, the state can take away.

The media think Santorum is singing “Onward Christian Soldiers” while heading off into the fever swamps. But Santorum is wagering his political future on his assessment of where we are in 2012.

He sees America dividing ever more deeply between those who hold to traditional Christian views on marriage, life and morality, and those who have abandoned such beliefs. He believes that the former remain America’s silent majority, and he is offering himself as their champion against a militant secularism that has lately angered more than just the right.