Is Putin Our Ally in Syria? 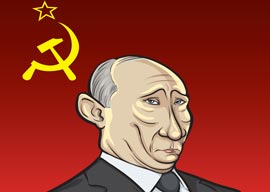 Among the presidential candidates of the Republican Party and their foreign policy leaders on Capitol Hill the cry is almost universal:

Barack Obama has no strategy for winning the war on ISIS.

This criticism, however, sounds strange coming from a party that controls Congress but has yet to devise its own strategy, or even to authorize the use of U.S. military force in Syria.

Congress has punted. And compared to the cacophony from Republican ranks, Barack Obama sounds like Prince Bismarck.

The President’s strategy is to contain, degrade and defeat ISIS. While no one has provided the troops to defeat ISIS, the U.S. is using Kurdish and Yazidi forces, backed by U.S. air power, to degrade it.

The Kurds have run ISIS out of Kobani, captured much of the Turkish-Syrian border, and moved to within 30 miles of Raqqa, the ISIS capital. Yazidis and Kurds last week recaptured Sinjar in Iraq and cut the highway between Mosul and Raqqa.

The terrorist attacks in Paris, the downing of the Russian airliner in Sinai, the ISIS bomb that exploded in the Shiite sector of Beirut, are ISIS’s payback. But they could also be signs that the ISIS caliphate, imperiled in its base, is growing desperate and lashing out.

Yet consider the Republican strategies being advanced.

“We partnered with Stalin in WWII. Is Vladimir Putin an untouchable?”

“We must wage the war to defeat the enemy. … [Obama] must call in the best military minds from the United States and NATO … and finally construct a comprehensive strategy that integrates our effort with the Kurds, Turks, Saudis, Egyptians and Jordanians.”

Mitt urges instead an alliance of countries that have done next to nothing to defeat ISIS.

The Turks are instead hitting the Kurds in Turkey, Syria and Iraq. The Saudis are bombing the Houthis in Yemen, not ISIS in Raqqa. The Egyptians are preoccupied with their own homegrown terrorists.

“Now is the time, not merely to contain the Islamic State,” says Mitt, “but to eradicate it once and for all.” But why did he not mention Russia, Iran, Assad and Hezbollah, all of which also wish to eradicate ISIS?

We partnered with Stalin in WWII. Is Vladimir Putin an untouchable?

Sens. John McCain and Lindsey Graham want U.S. ground troops sent into Syria and Iraq. But as Turkey has an army of 500,000 next door and Assad’s army would happily help wipe out ISIS, why not let Arab and Turkish boys do the fighting this time?

“America must lead,” is Jeb Bush’s mantra, and he wants U.S. boots on the ground and a no-fly zone over Syria.

“We should declare war,” says Bush.

Why then does Bush not call up Speaker Paul Ryan and Majority Leader Mitch McConnell and dictate the war resolution he wants passed?

And whom does Jeb propose to fight? Why declare a no-fly zone when ISIS has no air force? Does Bush plan to shoot down Syrian planes flying over Syria and Russian planes flying in support of Assad?

Has Jeb, like his brother, not thought this through?

If we declare a no-fly zone over Syria, or establish a “safe zone,” we risk war not only with Syria, but Russia, Iran and Hezbollah.

None of these allies of Assad will meekly stand aside while we take military action to deny the Syrian regime and army the right to defend itself and survive in its war against ISIS, al-Nusra and other assorted jihadists and rebels.

Having invested blood and treasure in Assad’s survival, and securing their own interests in Syria, they are not likely to submit to U.S. dictation. Are we prepared for a war against both sides in Syria?