Is That a Fact? 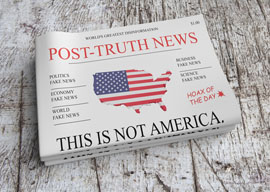 When I was young and writing history essays, I kept a store of useful quotations in my head, somebody else’s words being a neat or at least easy way of kicking off. Likewise when I became a newspaper columnist. One that I often trotted out came from Bacon’s Essays: “What is truth? said jesting Pilate, and did not stay for an answer.” Pilate had a point. Truth is often difficult to establish. The line seems even more relevant today when we are told we are living in a “post-truth age,” and when President Trump’s spokeswoman speaks of there being “alternative facts.” Speaking on BBC Television, the former Labour Home Secretary Alan Johnson, one of our more respected politicians, said this was an Orwellian”that is, 1984“use of language.

Perhaps it is. Yet, though Robert Burns declared that “facts are chiels that winna ding,” which means they are undeniable and can”t be wished away, there are facts and facts. For instance: In 1714 George, Elector of Hanover, became king of Great Britain and Ireland. He did so because Parliament had fixed the succession on him. These are facts, and he appears in the history books as George I. But for many of his subjects he wasn”t the rightful king. They recognized the Pretender”that is, claimant”the exiled James Edward Stuart, son of the deposed James II and VII, as king. This too is a fact. For more than fifty years till he died in 1766 James Edward was “the king over the water” to whom his followers, known as Jacobites, drank loyal toasts. You might say that James Edward’s reign was “an alternative fact,” and that it was also an “alternative fact” that George I was a usurper. Perception of truth depended on your standpoint. As a contemporary poet put it: “God bless the King”I mean the Faith’s defender/God bless”no harm in blessing”the Pretender/But which Pretender is, and which is King?/God bless us all”that’s quite another thing.”

“Truth is slippery as mercury.”

Truth, as Pilate indicated, is not always easy to establish. We all know that if you have five witnesses to a car crash, you are likely to get five different versions of what happened, five different explanations of the cause. One of them may be right; all of them may be wrong. They are offering “alternative facts.”

Suppose in a football (soccer) match a player falls to the ground in the penalty area as he is about to shoot at goal. Was he pushed or tripped? Did he dive in an attempt to con the referee? One set of fans will scream for a penalty; the other set will say, “No way.” The referee must decide the fact, but his decision will be questioned. Those who disagree with him will stick to their “alternative fact.” And who knows? They may be right.

When a marriage or relationship breaks up, you are likely to get different explanations of the cause, all pretending to be factual. The man was a bully and a drunkard, the woman a nag and a bitch. She was unfaithful; his coldness drove her to another’s bed, and anyway he was a gay still in the closet. Et cetera, et cetera. Disentangling the truth is tough, and anyway your perception is likely to depend on where you stand. There may be only one sure fact: They”re no longer together. But this one sure fact will be surrounded by lots of “alternative facts.

Does this mean we can never know reality? Philosophers have argued the question for some 3,000 years at least. Our far more remote cave-dwelling ancestors (assuming we can agree to accept their existence as probable) may have scratched their heads over the same problem. Eventually most of us, once we have stopped being students displaying our mental agility and questioning the existence of matter and therefore of other people, accept that there are physical realities, that it’s a fact, for instance, that Earth revolves round the sun, not vice versa. But, of course, vice versa was once a fact itself, and you might be tortured and burned at the stake if you denied it. Now we mostly shrug this off and say that our ancestors were ignorant or deluded. We should remember that our descendants will say the same about us, for much that we may now hold to be true and factual will seem like ridiculous nonsense to them.