Is the Present Better Than the Past? 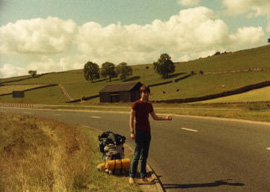 This week sees the publication of Steven Pinker’s new book, The Better Angels of Our Nature: Why Violence Has Declined. Pinker explains his book here.

I got the book to review for a fortnightly conservative magazine whose name is an anagram of WIN A REVELATION. So far I’ve only read a hundred of the 800-plus pages, so it would be wrong to engage with Pinker, even if I hadn’t already contracted with someone else to do so. Here I want to mull the somewhat larger and much more ancient issue: Is the present better than the past?

The sages of Old China looked back to a golden age of heroically virtuous emperors and alleged that everything had gone to the dogs since their bountiful reigns. Subsequent historians wrote up the dynastic histories in terms of “good first” and “bad last”—that is, of a noble founder sweeping away the rotten old dynasty to establish a fresh new one, which then proceeded to rot down in its turn. Wall charts of Chinese history have the past at the top. In Mandarin, “upper week” means “last week,” while “lower week” is “next week.”

Against this is the millenarian strain, strong in Judaism and Christianity, which sets utopia in the future. Karl Marx worked up a materialist version of the idea, promising us bliss in a future of pure communism. How this ever captured the Chinese imagination, I shall leave for another time.

“Perhaps it will end just fine. We don’t know. It’s never been tried.”

This controversy was the first I ever engaged with, way back in my infancy. I heard it around the house as a constant dialectical refrain all through childhood and adolescence.

My sire was a gloomy reactionary (it travels on the Y chromosome) who loved the past, hated the present, and dreaded the future. Life, on his reckoning, was never better than during his pre-WWI childhood. England was England back then, dad would tell you on no prompting at all. Women knew how to behave, the workshy went hungry, and food had some taste. I can see dad now in my mind’s eye, holding up his hand to mark off his thumb’s top joint: “Sundays we had a ham on our plate this thick!”

My mother took the opposite line. What about little kids going barefoot to school? Old folk shunted off to the workhouse? Titled parasites living in affluent sloth while intelligent, capable men labored in poverty? Her family had been poorer and bigger than dad’s. Working as a nurse she had seen the great improvements in hygiene and public health across the 20th century’s middle decades. As a housewife, she greeted with joy every new labor-saving gadget that came on the market.

Y chromosome notwithstanding, reason tells me that my mother had the better of the argument. We are cleaner, healthier, safer, and better-looking than our forebears. (Look at their teeth.) I would lodge three qualifications, though.

First: With the gains have come losses, most notably the slipping away of trust and common understanding chronicled by Robert Putnam in Bowling Alone. I’ve written about this elsewhere in connection with Robert A. Heinlein’s contribution to the 1950s radio series This I Believe. Heinlein:

I believe in my neighbors…in my townspeople…in my fellow citizens.…For the one who says, “The heck with you, I’ve got mine,” there are a hundred, a thousand, who will say, “Sure, pal, sit down.” I know that despite all warnings against hitchhikers, I can step to the highway, thumb for a ride, and in a few minutes a car or a truck will stop and someone will say, “Climb in, Mack. How far you going?”