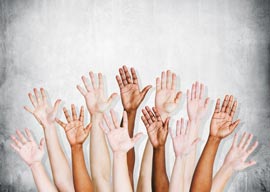 Thousands of U.S. troops safeguard the border of South Korea. U.S. warships patrol the South China Sea to stand witness to the territorial claims of Asian allies against China.

U.S. troops move in and out of the Baltic States to signal our willingness to defend the frontiers of these tiny NATO allies.

Yet nothing that happens on these borders imperils America so much as what is happening on our own bleeding border with Mexico.

Over three decades, that border has been a causeway into the USA for millions of illegal immigrants who are changing the face of America—to the delight of those who think the country we grew up in was ugly.

All sides of this quarrel have been using the figure of 11 million people here illegally. In her new best-seller, Adios, America!, Ann Coulter makes a compelling case that the real figure is close to 30 million.

If that is true, and if the next president embraces amnesty and a path to citizenship for illegal immigrants, that will mean the end to America as the Western nation we have been, and the beginning of America’s life as what Ann calls, unapologetically, a “Third World hellhole.”

“If diversity is a strength, then why are Iraq, Syria, Libya and Yemen falling apart? Why are Sunni and Shiite, Palestinian and Israeli fighting? Why are Scots, Basques, Catalans, Venetians and Flemish agitating for secession and independence?”

Indeed, when we consider the certain consequences of a failure to secure the border for six more years, and amnesty for people already here illegally, igniting a new invasion, we should ask ourselves:

What problem do we Americans confront that will be more easily solved with millions more immigrants?

Between 80 and 90 percent of those coming are from Third World nations. On average, they have higher illegitimacy rates than native-born Americans, higher drug use rates, higher rates of obesity, spousal abuse and child abuse, higher rates of disease, lower test scores and higher dropout rates, and higher crime and incarceration rates.

Children of immigrants are more gang-oriented. And Third World immigrants consume more per capita in social services than they pay in taxes. Hence they contribute to fiscal deficits at every level of government.

Undeniably, poor immigrants provide cheap labor for businesses and the rich. But their working- and middle-class American neighbors bear the social costs that they inflict upon communities.

Politically, immigrants from Third World countries, as they rely upon government for food, housing assistance, health care and the education of their children, support the Party of Government.

Mitt Romney lost the two fastest-growing major minorities, Hispanics and Asians, who now account for more than a fifth of our population and a seventh of our voters, by 40 points. And as their numbers and voting percentages rise, the GOP will find that reaching 270 electoral votes is not only more difficult than in Reagan’s day, it has become impossible.

Among the myths or lies drummed into the heads of Americans is that we have always been a “nation of immigrants,” and “diversity,” i.e., racial, ethnic and religious diversity, “is a strength.”

But America in 1970 was a white nation with a black minority of about 10 percent. And, as Coulter writes, “Nearly the entire white population of America from 1600 to 1970 came from a geographic area of the world about twice the size of Texas. The entire black population came from an area of West Africa about the size of Florida.”

Is ethnic, racial and religious diversity truly a “strength”?