Is Trump Enlisting in the War Party? 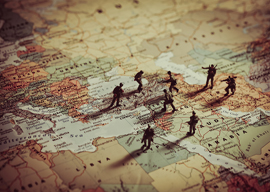 By firing off five dozen Tomahawk missiles at a military airfield, our “America First” president may have plunged us into another Middle East war that his countrymen do not want to fight.

Thus far Bashar Assad seems unintimidated. Brushing off the strikes, he has defiantly gone back to bombing the rebels from the same Shayrat air base that the U.S. missiles hit.

Trump “will not stop here,” warned U.N. Ambassador Nikki Haley on Sunday. “If he needs to do more, he will.”

If Trump fails to back up Haley’s threat, the hawks now cheering him on will begin deriding him as “Donald Obama.”

But if he throbs to the war drums of John McCain, Lindsey Graham and Marco Rubio and orders Syria’s air force destroyed, we could be at war not only with ISIS and al-Qaida, but with Syria, Russia, Iran and Hezbollah.

Are we ready for that? How would we win such a war without raising a large army and sending it back into the Middle East?

Another problem: Trump’s missile attack was unconstitutional. Assad had not attacked or threatened us, and Congress, which alone has the power to authorize war on Syria, has never done so.

“Like the gas attack in 2013, this has the marks of a false flag operation to stampede America into Syria’s civil war.”

What was Trump thinking? Here was his strategic rational:

“When you kill innocent children, innocent babies—babies, little babies—with a chemical gas … that crosses many, many lines, beyond a red line. … And I will tell you, that attack on children yesterday had a big impact on me … my attitude toward Syria and Assad has changed very much.”

Two days later, Trump was still emoting: “Beautiful babies were cruelly murdered in this very barbaric attack. No child of God should ever suffer such horror.”

Now, that gas attack was an atrocity, a war crime, and pictures of its tiny victims are heart-rending. But 400,000 people have died in Syria’s civil war, among them thousands of children and infants.

Have they been killed by Assad’s forces? Surely, but also by U.S., Russian, Israeli and Turkish planes and drones—and by Kurds, Iranians, Hezbollah, al-Qaida, ISIS, U.S.-backed rebels and Shiite militia.

Assad is battling insurgents and jihadists who would slaughter his Alawite brethren and the Christians in Syria just as those Copts were massacred in Egypt on Palm Sunday. Why is Assad more responsible for all the deaths in Syria than those fighting to overthrow and kill him?

Are we certain Assad personally ordered a gas attack on civilians?

For it makes no sense. Why would Assad, who is winning the war and had been told America was no longer demanding his removal, order a nerve gas attack on children, certain to ignite America’s rage, for no military gain?

Like the gas attack in 2013, this has the marks of a false flag operation to stampede America into Syria’s civil war.

And as in most wars, the first shots fired receive the loudest cheers. But if the president has thrown in with the neocons and War Party, and we are plunging back into the Mideast maelstrom, Trump should know that many of those who helped to nominate and elect him—to keep us out of unnecessary wars—may not be standing by him.

We have no vital national interest in Syria’s civil war. It is those doing the fighting who have causes they deem worth dying for.

For ISIS, it is the dream of a caliphate. For al-Qaida, it is about driving the Crusaders out of the Dar al Islam. For the Turks, it is, as always, about the Kurds.