Is Trumpism the New Nationalism? 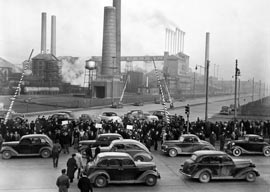 Since China devalued its currency 3 percent, global markets have gone into a tailspin. Why should this be?

After all, 3 percent devaluation in China could be countered by a U.S. tariff of 3 percent on all goods made in China, and the tariff revenue used to cut U.S. corporate taxes.

The crisis in world markets seems related not only to a sinking Chinese economy, but also to what Beijing is saying to the world; i.e., China will save herself first even if it means throwing others out of the life boat.

China has thus kept her currency cheap to hold down imports and keep exports surging. She has run $300 billion trade surpluses at the expense of the Americans. She has demanded technology transfers from firms investing in China and engaged in technology theft.

Disillusioned U.S. executives have been pulling out.

And the stronger China has grown economically, the more bellicose she has become with her neighbors from Japan to Vietnam to the Philippines. Lately, China has laid claim to virtually the entire South China Sea and all its islands and reefs as national territory.

“If there is a single theme behind his message, it would seem to be a call for a New Nationalism or New Patriotism.”

In short, China is becoming a mortal threat to the rules-based global economy Americans have been erecting since the end of the Cold War, even as the U.S. system of alliances erected by Cold War and post-Cold War presidents seems to be unraveling.

Germany, the economic powerhouse of the European Union, was divided until recently on whether Greece should be thrown out of the eurozone. German nationalists have had enough of Club Med.

On issues from mass migrations from the Third World, to deeper political integration of Europe, to the EU’s paltry contributions to a U.S.-led NATO that defends the continent, nationalistic resistance is rising.

Enter the Donald. If there is a single theme behind his message, it would seem to be a call for a New Nationalism or New Patriotism.

He is going to “make America great again.” He is going to build a wall on the border that will make us proud, and Mexico will pay for it.

He will send all illegal aliens home and restore the traditional value of U.S. citizenship by putting an end to the scandal of “anchor babies.”

One never hears Trump discuss the architecture of our rules-based global economy. Rather, he speaks of Mexico, China and Japan as tough rivals, not “trade partners,” smart antagonists who need to face tough American negotiators who will kick their butts.

They took our jobs and factories; now we are going to take them back. And if that Ford plant stays in Mexico, then Ford will have to climb a 35-percent tariff wall to get its trucks and cars back into the USA.

Trump to Ford: Bring that factory back to Michigan!

To Trump, the world is not Davos; it is the NFL. He is appalled at those mammoth container ships in West Coat ports bringing in Hondas and Toyotas. Those ships should be carrying American cars to Asia.

Asked by adviser Dick Allen for a summation of U.S. policy toward the Soviets, Ronald Reagan said: “We win; they lose.”

That it is not an unfair summation of what Trump is saying about Mexico, Japan and China.

While the economic nationalism here is transparent, Trump also seems to be saying that foreign regimes are freeloading off the U.S. defense budget and U.S. military.

He asks why rich Germans aren’t in the vanguard in the Ukraine crisis. Why do South Koreans, with an economy 40 times that of the North and a population twice as large, need U.S. troops on the DMZ?