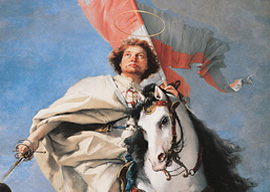 St. James at the Battle of Clavijo by Tieopolo

Barack Obama, Islam’s crouching eunuch, serves a special function in the new Mideast, that of towel-bearer for jihadist dictators at their bloodbaths. After rubbing down their leprous bodies with the billion-dollar ointment of “humanitarian aid,” Obama dries them off with the soft cloth of impunity.

The dragging of US Ambassador Christopher Stevens’s body through Benghazi’s streets was just such a bloodbath.

Obama had drawn water for it in his 2009 speech in Cairo. He then poured in the powders by giving Egypt’s government $1.6 billion a year.

The flying of al-Qaeda’s flag over our Egyptian embassy on 9/11/2012, the assault on our embassy in Yemen, and the butchering of ambassador Stevens all have Obama as a proximate cause.

There is also a remote cause behind our government’s policy of appeasement toward international Islamo-fascism.

Try a small band of neurotic social rejects establishing a creepy man-made “religion” at the Plymouth Colony in 1620. The Puritans had many things in common with Muhammad, the seventh century’s Martin Luther. We are now experiencing one of the most dramatic effects of the society they created: American accommodation of sharia law.

“Today, globalist immigration policies accomplish what used to be achieved through the scimitar: the Islamic occupation of Europe.”

While Islam’s idol is created (as opposed to uncreated), the same can be said of the “internal” god of our predominantly Unitarian populace”use whatever names you please for America’s thousands of religious sects.

If Islam has perverted marriage, so has Protestant America. If Islam is iconoclastic, so are America’s television-watching Baptists with their Lutheran abhorrence of Christian art.

Just as Islam reduces women to objects of pleasure whose bodies are considered dispensable communal property, the same can be said of Sandra Fluke and her squalid followers. Feminism not only wages war on women, it denatures womanhood.

In her 2007 book The Jamestown Project, New York University history professor Karen Kupperman claims that Elizabeth I removed the metal from the roofs of Catholic buildings to provide Sultan Murad III with munitions for his Islamic campaign against Rome and the Holy League. From the despots” mutually respectful correspondence we learn of the Sultan’s approval of the killer queen’s novel sect.

Doctrinal accommodation and military collaboration with Islam occurred in Protestant communities from the Reformation’s outset. Today, globalist immigration policies accomplish what used to be achieved through the scimitar: the Islamic occupation of Europe.

If our embassies are now aflame in Obama’s new Mideast, it is only because Islam is a pure reflection of what the West has become after 500 years of apostasy. Our relationship with Islam is now a race to the bottom.

In 2008, Archbishop of Canterbury Rowan Williams called for the introduction of sharia law in the United Kingdom. Pope Benedict XVI has made Muslim outreach a major theme of Vatican II’s ever-evolving religion, whose catechism (section 841) now teaches that Muslims worship the same god as Christians do”interesting news to both groups.