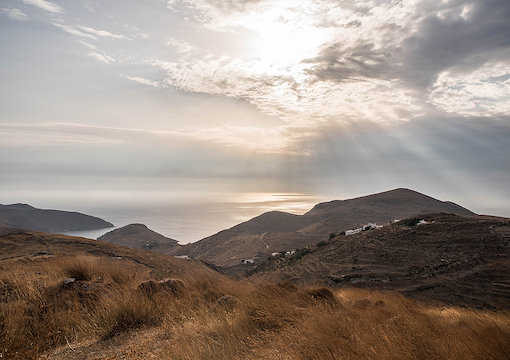 ISLAND OF SERIFOS—Let’s get one thing straight right off the bat: Island life is not for me. Island life off a boat, jawohl, but island life without a boat, nyet! Family czars insisted that living in tight quarters with COVID-ignoring sex-starved sailors would not be conducive to the health of my four grandchildren, who range from 2 months to 14 years. Better safe than sorry and all that, but from now on, COVID-carrying and sex-starved or not, I’m spending my summers in the company of sailors, going from isle to isle like a drunken Flying Dutchman.

Mind you, Serifos is an island in the western Cyclades that once upon a time was a place of exiles. Roman emperors banished criminals there, probably because it’s windswept, poor, and insignificant. By the time iron and copper were discovered, Nero and Caligula were long gone; nevertheless, striking Greek miners were shot dead by the fuzz back in 1916. Those were the days, when civil disobedience did not make you a celebrity but even got you a “gabardine en sapin,” as the frogs call a wooden box. And speaking of frogs, Serifos is full of them, but they are mute. No one has yet explained why Serifos frogs are mute, but something awful must have taken place to shock them into silence. Perseus washed ashore during mythological times, and then returned with the Gorgon Medusa’s head, scaring the crap out of everyone, including the frogs.

“At times I think Americans just all might die of fright, their last words being OMG!”

The population of the island is just over one thousand, and the natives are friendly due to the lack of rich tourism. The place is arid and windswept and more upside down than sideways. There are no slaves to designer labels, most tourists being backpackers and young. Unlike neighboring Sifnos, which is drenched in mimosa and bougainvillea, Serifos has some olive trees and lotsa cactuses. Although it sounds ritzy-glitzy, I hadn’t visited a public beach in fifty years, and the experience did not leave me traumatized for life. The wind was blowing a storm, the sand turned Antonius and Theodora into Bedouin children, and the only safe place was underwater in the clearest water this side of Patmos. Despite this, there were no lifeguards to whistle people back, no shark warnings, no one telling swimmers to get back or else. Everyone did whatever they felt like doing, some young women calling my 18-month-old grandson “Angeloudi.” It means little angel, and I don’t blame them. He was the only very blond naked cherub on the beach, and he looked like he had been stripped off the ceiling of some Italian cathedral. Greeks are very nice with children, and they went overboard when they found a tiny naked blond thing waddling around. In America, they probably would have arrested him for indecent exposure.

The difference is that this was not an American beach, where health and safety concerns make the old penal colonies of French Guiana seem as relaxed as the Hugh Hefner Playboy swimming pool in El Lay. Lawsuits by greedy lawyers have turned America into one big prison. You can’t swim anywhere, you can’t say anything, you can’t write anything. Verboten is the operative word. Shark warnings had everyone frying in the sands last week in the Hamptons—one unfortunate woman was bitten and died as a result up in Maine—but we kill one million sharks each year because our “cousins” out east like the soup, yet four or five deaths caused annually by sharks lock up American Tarzans for the duration. Strange this, hundreds of young, mostly black men shoot each other each and every week in the States, yet try to venture fifty feet off shore into the surf and all hell breaks loose. Four hundred years ago a bunch of religious types took off from Plymouth (near where my friend Tim Hanbury lives on one million acres), and they established a colony now known as the United States, a superpower that has lost the last three wars it began—Uncle Sam did win a very famous victory in Grenada—but everyone’s scared shitless of saying or doing or writing the wrong thing. At times I think Americans just all might die of fright, their last words being OMG!

Never mind. I’ve got problems of my own: The house I’ve taken is the nicest on the island, beautifully decorated and overlooking a bay, but life in Serifos is as exciting as examining a leasehold contract. Taki, the oldest grandchild, thinks of girls and football all day. Maria, 12, thinks of what 12-year-olds think of all day. Antonius walks around showing off his tiny willy, and Theodora sleeps. Not much to do at night, either, as the local beauties walk three abreast, giggle, and tell dirty old men who try to chat them up to f— off and then some. The only excitement was when my son-in-law discovered a book written by yours truly 35 years ago and published in the States—Princes, Playboys, & High-Class Tarts—among the shelves, opened it, and found a dedication by the author to the owner of the house I’ve taken, which gave the game away. The owner of the house, I was told, was a great beauty. Apparently we tripped the light fantastic long ago and I put it on paper. No one in my family seemed to mind, but I did, having forgotten all about it. Here’s my tip for the week: Don’t get old.