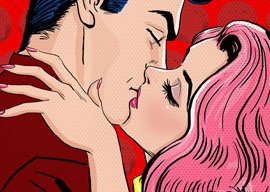 Regulars know I”m not much of a romantic. Freud said that “love and work” are “all there is,” and I”ve always been more devoted to, and better at, the latter. However, I”d go Freud one better: He clearly meant that love and work were opposite realms, two separate and decidedly dissimilar rooms. Whereas I”ve found that treating love like work, well, works best.

I don”t know if they still teach what in my day was called “Marriage and Family” in Catholic school. If so, I”m afraid to find out what the current curriculum consists of. When I was in grade 11 it was mandatory, and I dreaded what it would be like. I”d always said I”d never get married. Having a thrice-divorced mom will do that to you, along with the nonstop cultural drumbeat that singlehood was superior.

Slits songs stomped through my brain on constant repeat back then: Only “typical girls” cared about “love and romance” and all that junk, they shouted. Of course, I secretly wished some boy would even look at me sideways, but doubted that would ever happen, so I stocked my psyche with such “who needs “em anyhow?” ammo, like a kind of prepper spinster.

I passed through my childhood and teens in what I now recognize as a clinically depressive fog, so I remember only three sentences I heard in “Marriage and Family” class. But they were enough, and then some:

Love is not a feeling. Your wedding is just one day. Marriage is work.

That love is an act of the will is a very Catholic notion. If we only practice charity”that is, love”when we “feel like it,” little of it would get done. The bit about “weddings” irritated all the “ginas” in my class, who”d been planning their big days since they”d been old enough to grow mustaches, and had every detail except (maybe) the groom”from bridesmaids” dresses to bomboniere”lined up already. And hearing that marriage was work made it more, rather than less, appealing to me, if only a little.

Absorbing this information felt so very satisfyingly grown-up, like acquiring a taste for olives, or being able to refer to “my accountant.”

Now, over 25 years later, I”m forced to admit that the marriage I never thought I”d have is more successful when I treat it like a job. That means trying to keep crying jags and tantrums to a minimum, and not shirking my share of the chores or rolling my eyes when asked to add new ones.

Being introverted Taurean homebodies means that Arnie and I naturally settled into a kind of separate togetherness that emphasizes efficiency over emotion. This means two TVs, two bedrooms, two phones, separate bank accounts and credit cards. We actually email each other from ten feet away. We really should”ve sprung for two bathrooms, too, but otherwise, this arrangement is close to perfect.