Why Libertarians Should Support the Palestinians 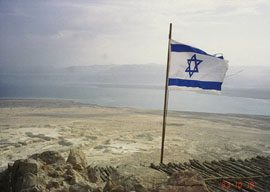 Israel is at it again, caught by its own free press with its hand in the till”not so much the till as the land that other people till. The Israeli press is not only free, it exposes official malfeasance, and reporter Nir Hasson of the daily Haaretz wrote last Friday:

The Israel Lands Administration is transferring properties in the Silwan neighborhood and the Old City of Jerusalem to right-wing groups Elad and Ateret Cohanim for low prices, without issuing a tender as required by law, a Haaretz investigation has found.

The state and the groups involved concealed the transactions and refused to give any information about them.

Land theft is nothing new in Israel, as most of the land was stolen from its inhabitants long ago. For the benefit of a new generation of settlers, Israel continues to steal property in the areas the army occupied in June 1967.

So what else is new? Alas, nothing. But one wonders how the United States, which ostensibly believes in the right to own property, supports and subsidizes land confiscation in another country. While U.S. trade delegations threaten those who tamper with rights to less tangible forms of property, such as Monsanto’s patents on plant species that it discovered rather than invented, no one in the colossus that is the American government balks at helping Israel steal the houses and farms of people who happen not to be Jewish.

When I moved to Lebanon in 1972, I first learned about the Palestinian diaspora and the land that had been confiscated from its owners when they were expelled. I wrote to my old philosophy professor, Dr. John Hospers. He was the head of USC’s School of Philosophy and that year’s Libertarian Party candidate for president. An excellent teacher, he wrote a book, An Introduction to Philosophical Analysis, that remains one of the best and clearest statements of what analytic philosophy does.

“Land theft is nothing new in Israel, as most of the land was stolen from its inhabitants long ago.”

I argued in my letter to Dr. Hospers that the Palestinians deserved libertarians” support because their right to possess the property on which they had lived and worked had been violated. In simple terms, a farmer whose name might have been Mohammed Hamid had been forced through violence to surrender his property to a collective farm, a kibbutz, or the state of Israel (where most land is state-owned).

Unfortunately, our letters are in storage in England, and I”m in France these days. As I recall, Hospers wrote back to say that he did not believe much in collective rights, which included national rights. A dispute over land between people who had lived on it two thousand years ago (or their putative descendants) versus those who were there in 1948 (or 1967 for the West Bank) was an issue for historians, not libertarians.