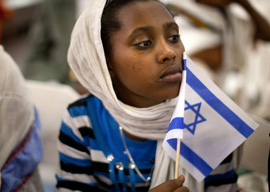 With the Washington establishment agreeing that what America needs right now is to double down on guest workers and amnesty for illegal aliens, it’s worthwhile to notice how a serious country such as Israel deals with past mistakes in immigration policy.

In America, we try not to learn from the past. For example, in all the talk this year about a new amnesty, how often have you heard mention of one of the 1986 amnesty’s chief unanticipated consequences: the subsequent Hispanic baby bubble?

The demographic bulge proved hugely expensive to California taxpayers. In the later 1990s, this pig-in-the-python cohort started to overcrowd California schools, leading to construction of new ones. Since it takes forever to get anything built in California”the $578,000,000 Robert F. Kennedy facility on Wilshire Boulevard didn’t open until 2010 after a 21-year ordeal”by the time the new schools were finally finished, many of these Amnesty Bubble kids had already dropped out.

Why did total fertility rates increase so dramatically for Hispanic immigrants?…In California alone, 1.6 million unauthorized immigrants applied for amnesty (legal immigrant status) under this act. The vast majority were young men, and many were agricultural workers who settled permanently in the United States.

Illegal aliens who get amnestied get lonely and send for ladies back home. When they aren’t illegal anymore, it’s time to have babies. The PPIC continues:

Previous research indicates that many of those granted amnesty were joined later by spouses and relatives in the United States….As a result, many young adult Hispanic women came to California during the late 1980s.

In contrast, Israel is not the kind of country to follow up a failed immigration experiment with more of the same.

“Israel’s government and society have done an impressive job showing that a determined polity can alter fertility rates in its own favor.”

Between 1984 and 1991, Israel achieved a public-relations coup by importing tens of thousands of Ethiopians who claimed to be Jews. Over the last decade, however, Israel has been taking direct action to limit its black citizens’ fertility.

Originally, Israel had banned immigration by the various sub-Saharan African tribes that claim some kind of hazy Jewish heritage, arguing that they aren’t real Jews. (Recent DNA studies suggest that Ethiopian Jews are only tenuously related to other Jews. These communities probably had a limited number of Jewish ancestors, travelers who married into the much larger local populations.)

In the fevered post-1967 ideological climate, however, Zionism was denounced around the world as racism, as the latest manifestation of white colonialism. The Jewish state hit upon the PR masterstroke of embracing its Ethiopian aspirants.

This didn’t mollify the Arabs, but the symbolism pleased a more important audience: American Jews concerned about Israel appearing racist. Unsurprisingly, this living proof that you could be Israeli and black proved immensely popular with American Jews, who showered Israel’s small community of Ethiopians with $600 million in donations.

Also unsurprisingly, the Ethiopians have proved increasingly less popular with their Israeli neighbors, who have come to view them and their children as backward and crime-prone. Whether that is due to white Israelis’ racism or to the blacks’ shortcomings is a matter of dispute.

What is clear is that Israelis have lost their naÃ¯vetÃ© about African immigrants.

Israel’s government has allowed most of the remaining Ethiopian Jews to immigrate, but it has not leapt at any of the new opportunities facilitated by DNA testing to declare additional East African tribes eligible. For example, since Robert Mugabe began destroying Zimbabwe’s economy, some of the Lemba people of that unfortunate land have been agitating for the right to move to Israel based on their vaguely Jewish customs and DNA. But Israel has not been forthcoming.

The booming Israeli economy naturally attracts black illegal immigrants. The Israeli government long relied on Egypt’s Mubarak regime to keep blacks from approaching its border, but the Arab Spring sprung a leak in that system.

So Israel has been hustling to finish its border fences to keep out black undocumented workers (or, as Prime Minister Benjamin Netanyahu calls them, “illegal infiltrators”). Contrary to American conventional wisdom, fences seem to work just fine in Israel. The Interior Ministry recently announced that African intruders dropped from 2,295 in January of 2012 to only 54 in October.