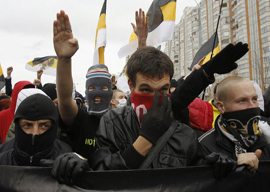 Friday, thousands in Moscow, giving Nazi salutes and carrying placards declaring, “Russia for the Russians!” marched through the city shouting racial slurs against peoples from the Caucasus.

In Nigeria, Boko Haram, which is Hausa for “Western education is sacrilege,” massacred 63 people in a terror campaign to bring about sharia law. Seven churches were bombed.

Ethnic nationalism, what Albert Einstein dismissed as “the measles of mankind,” and religious fanaticism are making headlines and history.

Welcome to the new world disorder.

What has this to do with us? Perhaps little, perhaps everything.

In three weeks of my radio-TV tour to promote “The Suicide of a Superpower,” no question has occurred more often than one about the chapter “The End of White America.” Invariably, the question boils down to this:

Why should we care if white Americans become a minority? America, interviewers remind me, assimilated the immigrants of a century ago—Italians, Poles, Jews, Slavs—and we can do the same with peoples from the Third World.

“Ought we not first solve the problem of fully integrating people of color, before bringing in tens of millions more?”

And perhaps they are right. Perhaps the year 2050 will see an America as united as the America of Dwight Eisenhower and JFK.

Yet there are reasons to worry.

First, the great American Melting Pot has been rejected by our elites as cultural genocide, in favor of a multiculturalism that is failing in Europe. Second, what we are attempting has no precedent in human history.

We are attempting to convert a republic, European and Christian in its origins and character, into an egalitarian democracy of all the races, religions, cultures and tribes of planet Earth.

We are turning America into a gargantuan replica of the U.N. General Assembly, a continental conclave of the most disparate and diverse peoples in all of history, who will have no common faith, no common moral code, no common language and no common culture.

What, then, will hold us together? A Constitution over whose meaning we have fought for 50 years?

Consider the contrasts between the old and new immigration. Where the total of immigrants in the “Great Wave” from 1890 to 1920 numbered 15 to 20 million, today there are 40 million here.

In 1924, the United States declared a timeout on all immigration. But for almost half a century since 1965, there has been no timeout. One to 2 million more immigrants, legal and illegal, arrive every year.