It Must Be a Conspiracy 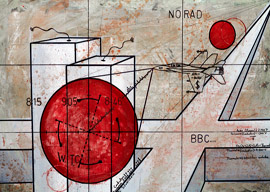 It is curious that we are never more than a slight physiological or anatomical derangement away from paranoia. An alteration of blood chemistry is often sufficient to make us believe that they are after us, and to act upon the supposition. No doubt evolutionary psychologists would explain this by the fact that on the savannahs of Africa, where Man first evolved, it paid to be a little mistrustful; indeed, the penalties for not being a little mistrustful were considerable. A lifelong city-dweller, I once took a walk in the Botswanan bundu as if I were going for a stroll in a suburban park and stumbled across a lion. Fortunately for me it was old and scraggy, a bit like a stuffed lion in a municipal museum, half-devoured by moths; but I became more careful afterwards. Paranoia is never far below the surface.

My Internet server recently carried a story about the EgyptAir flight that crashed into the Mediterranean on its way from Paris to Cairo. The headline of the story was “Cleaning crew faces questions.” The actual story did not contain a single word to substantiate this headline, though of course it would be only natural for the staff that had had access to the plane before it took off in Paris to be questioned. Nevertheless, it wasn”t difficult to read the subtext, as literary theorists call it, or the imputation, as we simple folk call it, of the headline: The cleaning staff at the Paris airport, many of whom are Muslim, could have put a bomb on board while they were cleaning the aircraft, and therefore they did so.

The spokesman for the French agency that investigates air crashes was considerably more circumspect with regard to reports that smoke had been detected in the aircraft shortly before it disappeared from the radar screen. “We are drawing no conclusions from this. Everything else [i.e., everything other than there was smoke] is pure conjecture.” Here, at least, was a man with a sense of what constitutes evidence. Whatever his beliefs in the privacy of his skull, he was not going beyond what he could substantiate.

“It is very rare that a conspiracy theorist laughs at the state of the world.”

No such scruples inhibited the commentators. For one, the smoke proved that the crash was caused by an incendiary bomb. Another had a degree of certainty that suggested contacts in high places:

The plane was taken down with an Electronic Pulse weapon and Israel did it…. A French satellite picked up the shoot down.

Just imagine for a moment trying to discuss the matter with the author of this opinion. It would be like trying to argue a man out of a deep-seated delusion. Before long you would have entered a mental labyrinth from which there was no exit. Any evidence you adduced would be discounted as having been manufactured by the very conspirators who brought the aircraft down. His conclusion would be irrefutable in the worst possible sense: The very attempt to refute it would prove to him just how far the conspirators had succeeded in covering their tracks.

There followed another theory by a man whose first language was not English:

We can blame the nonsense UK legal system for encouraging and motivate terrorism.

One imagines that the evidently enraged writer had had some slight legal problem in Britain and that he did not fully understand the arcane process by which it was resolved, probably not in his favor. Even native speakers of English sometimes have similar problems of comprehension, though I suspect that no system of law of any sophistication or complexity is entirely transparent to the laity.

Be that as it may, it is not easy to see why or how deficiencies of the law in Britain (I leave aside the fact that Scottish law is different from English) should have encouraged or motivated someone to blow up an aircraft going from Paris to Cairo. If it did, the terrorist, like the writer, was in the grip of an inchoate but paranoid theory.

That native command of the English language is no guarantee of coherent thought is proved by the next response to the article:

It is up to the authorities to get this sorted out, it seems to me they are turning a blind eye to it. After all this is not the first time. Corruption and back-handers come to mind.