It Takes a Village to Eat a Rockefeller 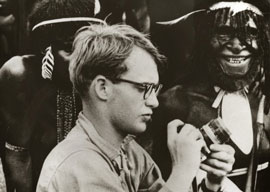 I have no “guilty pleasures,” being long past caring what anyone thinks of my terminally middlebrow taste. No, I’ve outgrown Dali, don’t worry”although I won’t admit to just when“but even a lesser Group of Seven still brings tears to my otherwise unpatriotic eyes.

My musical preferences are no more sophisticated. I like Dialogues of the Carmelites because it has nuns in it. The Monkees are better than The Beatles. Weirdly for an aging punk, I also maintain an abiding affection for heavily glazed, overstuffed, Geffen-era Aerosmith. Alas, one of the catchiest numbers in that catalog is also the most lyrically problematic.

I’m talking about “Eat the Rich.”

Multimillionaire musicians belting out a song with that title is silly enough, but even if prepubescent Payatan trash pickers performed it, the message would nevertheless unnerve a temperamental capitalist such as me.

Sure, the song seems to be a jeremiad denouncing unearned, inherited wealth, but I still feel guilty every time I tap my toes to that cheaply thrilling jungle-drum intro.

Which brings us, finally, to what’s shaping up to be the nonfiction book of the season: Carl Hoffman’s Savage Harvest: A Tale of Cannibals, Colonialism, and Michael Rockefeller’s Tragic Quest for Primitive Art.

Hoffman says he’s solved the riddle of the 23-year-old Rockefeller’s disappearance in New Guinea in 1961 while on an expedition to gather artifacts for the family’s primitive-art collection.

When Rockefeller was declared legally dead in 1964, the official cause was drowning. However, rumors that he’d been consumed”either by sharks or the cannibalistic Asmat natives”persisted.

Hoffman retraced Rockefeller’s steps and unearthed “hundreds” of documents “between the Dutch government and the Catholic Church,” the two Western powers that ostensibly ruled the region. An elderly Dutch priest who’d ministered to the Asmat told Hoffman that four natives had confessed to witnessing the young American’s ritualistic murder and cannibalism.

The priest, in turn, had cabled this information to the governor of Dutch New Guinea, but neither he nor the local bishop wanted the story to go any farther. Michael’s gruesome end reflected poorly on their “sivilizin’” skills.

This evidence is convincing, so why Hoffman felt obligated to go full Capote on his readers is a mystery in itself. A la In Cold Blood, the author presumes to speak, think, and feel for Rockefeller. We’re informed that when fatally speared, “Michael screamed, groaned a deep, inhuman sound.” Lines such as “He knew that feeling from swimming off the coast of Maine every summer” are pretentious and a little ironic. Don’t cannibals presume to absorb the spirits of their victims, too?

No doubt some will find Hoffman’s conclusions less than persuasive. I’m thinking of anthropologist Sally Price, for one, whose 2002 book Primitive Art in Civilized Places relates her encounter with a lowly museum employee:

…[L]et us consider what happens to this image when it leaves the hands of professional writers, film makers, museum curators, and other members of the educated elite. I offer for consideration a verbal treatise on the nature and meaning of Primitive Art that was presented spontaneously in November 1984 by a security guard patrolling the Michael C. Rockefeller wing of the Metropolitan Museum of Art in New York.