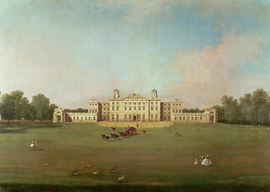 Oh, to be in England, and almost die of heat after the Austrian Alps. Yes, Sarah Sands, writing in her Spectator diary about last week’s parties in London, was right, except she went mostly to the bad ones. The really good ones are coming up as I write this week. Blenheim Palace and Badminton House are venues this weekend of great balls, and I only mention them because there are only two English dukes I acknowledge, Beaufort and Marlborough, because I knew both men when they were in their teens. There has been some grumbling about the fact that neither house would give in and change the date, but I don’t agree. Two simultaneous country balls in two ducal houses split the social climbers and crashers in half, making it easier and more fun for the rest of us. Then there is the Bismarck conundrum: Leopold and Debbie are invited to both, but can’t make up their minds with which one to start. My advice was to do it alphabetically.

And speaking of the only two dukes I uphold, I recognized only one countess until last week, Countess Bismarck, but now there’s another one, and if you read my column last week you will know which one she is. Never mind. This is party week and there are two of them at The Spectator; there is the Pugs annual lunch at a place I am not at liberty to disclose, a white-tie and decorations dinner followed with a speech by yours truly at a St. James’s club whose name I am sworn to secrecy not to reveal—the penalty of disclosure, I was informed, is compulsive attendance to Gwyneth Paltrow’s wedding and enforced reading of William Kristol’s “A Yiddish Lament”—with the grand finale taking place down the M4 on Saturday. (I have reserved a hearse for my return to the capital on Sunday.) Yippee!

And now to some unpleasant business: In the Spectator diary of two weeks ago, Andrew Marr, who sounds like a decent if misguided man, wrote the following: “Our job at the BBC is not to denounce, lampoon, deride or sneer at elected politicians but to ask them politely, direct and relevant questions.” If only, says Taki, the world’s most polite and objective journalist. The other evening I was channel surfing when Newsnight came on, and presto: The complete opposite of what Marr had written was being demonstrated right before my eyes by that onetime sexpot Emily Maitlis. She had a Hungarian official on her program—I didn’t get his name, but he could have been the Hungarian foreign minister—a very polite and precise man whom Emily accused of everything but the Holocaust. In short, she sneered at him and hinted that the vote in Hungary was manipulated, hence the government was not duly elected, then went as far as calling Viktor Orban, the extremely popular Hungarian president, almost a dictator. Her manner was that of an angry hausfrau reading the riot act to a bunch of drunken hooligans. “The E.U. stands for justice and human rights and is against racism,” spat Emily, as if she were talking to a mini-dictator like Jean-Claude Juncker. The poor Hungarian remained polite while the miniskirted Emily rained abuse.

Now, we all know about the BBC’s left-wing bias, so I should not have been surprised. What bothered me was the virtue signaling I suspect was the reason Emily aimed her wrath at the Hungarian. She was also trying to impress her BBC controllers, who are most probably ex-commies pissing bullets over the present state of affairs: Brexit, no more open borders, and nationalism prevailing over globalism. Worst of all, for the BBC’s overpaid Marxist gang, is that the balance of power has shifted from the unelected bureaucrats of Brussels to the popularly elected Kurz, Orban, Kaczynski, and Salvini. Personally I have nothing against Emily, but even I was shocked at the vehemence of her questioning, as if the man across from her was a known criminal. I once approached la Maitlis at a London garden party and—unsuccessfully trying to pick her up—told her she reminded me of Andromache. “Wasn’t she the one who murdered her children?” stammered Emily. No, dear, that was Medea; Andromache was Hector’s wife, and a great woman, and if you spent more time reading the classics and less trying to impress your Marxist bully-bosses, you’d be better off in the long run.

Left-wing hacks as a class are poorly educated and highly imitative people of very small imagination. When they latch onto some new trick—like the popularity of nationalist leaders—they run it into the ground by calling them fascists and evoking the rise of Mussolini. Even that idiotic woman Madeleine Albright is over here trying to sell her unreadable book, one that proposes Europe is about to go Nazi. Andrew Marr the misguided had the moron on his program.

Well, the good news is that if we do go Mussolini’s way, beautiful uniforms will be back in fashion, as will flared breeches and knee-high boots. The other thing uneducated journalists don’t get is that in most countries winning an election means the winner leads the nation. He or she leads not only the executive but also the legislative and judicial apparatuses. It might look like dictatorship, but it’s nothing of the kind. Anyway, I like strong leaders, especially when they kick out billionaire busybodies like George Soros, something the British government should do because of his meddling in the democratic process that chose Brexit. Soros Raus!