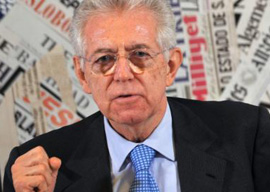 I never cease to be amazed at how foreign newspapers, especially American or British ones, fail to report the truth about Italian politics. Since I moved here in 1998, I cannot recall a single article that was not a grotesque distortion of the political reality. If they get Italy so wrong, what about the rest of the world?

In Italy’s case, the reason why foreign correspondents and their editors simply do not “get” the country is not hard to fathom. They are herd animals who regurgitate what they read in the main Italian newspapers and what they hear on the main political television programs about Italy, which are nearly all controlled by former members of the Italian Communist Party, the largest in Europe outside the Soviet Bloc until the fall of the Berlin Wall, and whose views are so left-wing they make Barack Obama seem like the president of a South American banana republic. Sloth, however, is not the only explanation. It suits the international herd’s PC agenda to portray Italy the same way Italy’s media do.

Nevertheless, I would have expected less propaganda and more competence from The Wall Street Journal, even if it is now owned by Rupert “The Dirty Digger” Murdoch. No chance. In an editorial published on March 27 in its online version and some US editions headlined “Monti Pulls a Thatcher,” the WSJ ludicrously applauded Mario Monti, Italy’s unelected prime minister, as a Latin version of Margaret Thatcher, the legendary British prime minister who defeated two dictatorships: that of the British left in the workplace and that of the Argentine right in the Falkland Islands.

“I prefer to blame the Italian left, not Wall Street.”

Signor Monti, a former university economics professor and Brussels bureaucrat who was also an “international advisor” at Goldman Sachs from 2005-2011, is no Iron Lady.

The sobrio professore (sober professor), as he is nicknamed, became prime minister in November 2011 in a palace coup supported above all by the Italian left that ousted Silvio Berlusconi, the flamboyant media tycoon, who had been elected in 2008 with the largest majority ever achieved by an Italian prime minister.

Unlike Lady Thatcher, and Italians come to think of it, Professor Monti is so dull and so grey, so bureaucratic, that like a hypnotist he wafts you off into a trancelike state just by repeating in his dull grey bureaucratic voice the same soothing mantra: “fine, everything’s fine.”

His mission, as head of a government of unelected economists and bankers, is simple: to stop Italy going the way of Greece. So far his only concrete, as opposed to cosmetic, reforms have involved raising existing taxes and inventing new taxes in one of the the world’s most-taxed countries. He has done nothing to hack down Italy’s staggering public debt (119% of GDP) or bloated army of public-sector workers. And he has done little to cut Italy’s bloated public spending on pensions, which swallows up almost one-third of government revenue each year in a country getting far older far quicker than nearly all others thanks not only to the healthy Mediterranean diet but to one of the world’s lowest birth rates (1.4 children per woman).

The WSJ compared Monti so fawningly to Thatcher because of his latest reform, which is supposed to abolish Italy’s stultifying communist-inspired “jobs-for-life” labor laws which make it virtually impossible to sack anyone in firms employing more than 15 people.