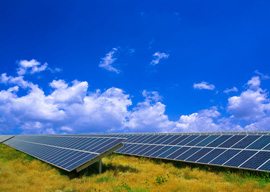 Everywhere I drive in the Italian countryside I come across fields that are now desecrated by ugly solar-power plants.

These silver constructions would be aesthetically acceptable only on a lifeless distant planet or in a postmodern desert city such as Abu Dhabi.

This is odd because in Italy, which we must thank for the explosion of artistic genius known as the Renaissance, you need permission from the council to paint your house a different color. How come such aesthetic rules do not apply to solar power plants?

The largest one I have seen is on the plains just before the Apennine Mountains begin. It is surrounded by fruit trees, wheat fields, and vineyards. If you are not careful, you can see it from the hills. It is like a giant’s mirror.

I drove there to find out who owned this extraterrestrial monstrosity, how much taxpayer money had been hosed at him, how much electrical current”if any”the plant produced, and at what price.

A sign on the premises said the plant is called “Carbonara 1.” Fantastic! Presumably, Carbonara 2 is already in the pipeline. Will no one put a stop to this evil? The sign also said the plant had a capacity of “1 MWp.” It certainly looked very potent.

“Solar power would be utterly uncompetitive if it had to fight for survival in the real world.”

I rang the phone number on the sign and immediately got through to a Signor Laghi, a geometra (building surveyor) who told me that he built the plant and was the managing director of the company that owned it. But he had no time to talk to me until the end of August, because the deadline for this year’s government solar-power subsidies fell on the 27th and he was overwhelmed with work.

Lucky him! I later spoke to Mirko Antaridi, another local geometra who gave me the lowdown on the solar-panel gold rush.

He told me a “1 MWp” capacity means the capacity to produce “1 megawatt peak” of electricity a year. Such a plant has 4,200 solar panels, covers five acres of land, and costs about 1.7 million euros ($2 million) to construct.

He said the average Italian household consumes around 2,500 kilowatt-hours of electricity a year, so this gigantic plant that irritates me so much can only satisfy the annual consumption of around 400-500 households.

But at what price? Ah-ha! Electricity produced by solar power is much more expensive than electricity produced by coal, nuclear, or gas power plants. But thanks to the relentless propaganda about manmade global warming peddled by the followers of the New Church of the Earth Goddess Gaia, the EU’s governments have agreed to give massive taxpayer subsidies to renewable energy sources such as solar power.

I asked Signor Antaridi to give me a figure for the 1 MWp solar plant near me. He told me such a plant would get 300,000 euros a year in subsidies, guaranteed for 20 years. For each kilowatt-hour it sells to an energy provider it gets back 0.26 euro from the taxpayer.