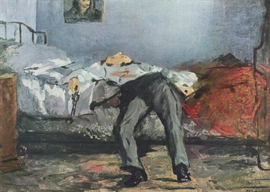 The Suicide by Edouard Manet

Europe’s crisis is existential and economic. Here in Italy the talk is of suicide. Hardly a day passes without an Italian in financial trouble killing himself. (They are all men.)

But the Italians are a nation of drama queens who are right up there with the best of them when it comes to playing the victim. So even when an Italian commits suicide”a mortal sin”it cannot be his fault.

But when an Italian does something good or positive he never shies away from shouldering 100% responsibility for the deed.

Victims? What? As in, the innocent victims, through no fault of their own, of a killer virus or a kamikaze’s bomb? Yes, actually. Those 37 Italians who had killed themselves so far in 2012 (by Friday, another four had gone) were forced to do it by the Euro Crisis.

And in Italy, the face of crisis is unelected Prime Minister Mario Monti, who gave up his job as an international advisor at Goldman Sachs to take power in a palace coup last November.

Monti is an assassino, they are saying. Monti, an economist and former eurocrat, is angry.

“The Italians, not their politicians, nor anyone else, are to blame.”

In big tabloid capital letters, the headline on the same front-page piece about the suicide epidemic quoted Monti: “MI ASSOLVO.” Literally: “I Acquit Myself.” In other words: “I am innocent.” As an Italian, he would say that, wouldn”t he?

As an Italian, he also had to shift the blame for the suicides from those who committed suicide onto someone else. So he reminded Italians that his predecessors got Italy into this mess, not him.

He is right, not that he is any better. But not even they are to blame for Italy’s suicides. Here’s why: Italy’s problem, like Europe’s, is catastrophic unsustainable public debt, currently at 120% of GDP.

The truth that few Italians are willing to admit is this: The Italians, not their politicians, nor anyone else, are to blame.

Since the 1980s, the Italians have voted, time after time, for governments who promised and delivered all manner of wild and wonderful spending junkets paid for by borrowed money.

Just as bad, the Italians could not wait to abandon the lira in favor of the wretched and doomed euro in 2002 and hand over control of their currency to the Brussels bureaucrats and the Frankfurt bankers.

If the Italian suicides are not the fault of those actually hanging or shooting themselves, then the fault lies with all Italians.

To be fair to the Italians, Italy does bring out the suicidal in even the strongest and least insane of men.

Here’s a small example from my own life. In February, a film crew from the state television channel RAI came to interview me about fascist dictator Benito Mussolini’s diaries because I am, for some weird reason, an authority on the subject.