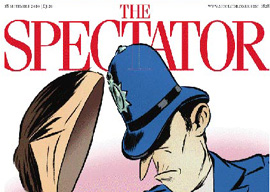 The London Spectator is the oldest weekly magazine of the English-speaking world, a jewel of a magazine as distinguished and respected as it is elegantly written. It was first published in 1828, just as modern Greece became a nation, and in a recent speech the sainted editor remarked that the Speccie was as old as its longest-running columnist, which is yours truly.

Graham Greene, no slouch where writing is concerned, called the Spectator “by far the most elegantly written weekly in the English-speaking world” and went as far as to invite one of the most notorious drunks of London’s bohemia, our “Low Life” columnist Jeffrey Bernard, to stay with him in Antibes. Both Greene and Bernard are now gone, but the Speccie has recently reached an all-time high in circulation—over 85,000 copies—a fact which seemed to grate with our literary editor, Mark Amory: “I remember when our circulation was 12,000 and EVERYBODY used to read it.”

I joined the magazine as a columnist back in 1976, when it sold around 8,000 copies per week but it seemed that everyone you knew read it. Everyone, that is, at Oxford and Cambridge, in Westminster, in Kensington and Belgravia, as well as in London’s St. James’s clubland. Now at 85,000 copies, owned by the Daily Telegraph group, and a big moneymaker, the Speccie’s sometimes reactionary ethos is not as profound as it once was—who can forget its early support of the postage stamp and its prophetic thoughts on the motor carriage?

“Its writers continue to believe they are communicating with a smallish and highly educated and sophisticated audience.”

Back in 1976, the Speccie’s headquarters were a Georgian house on a leafy Bloomsbury street next to the house of Charles Dickens. We have since moved to yet another grand house in a quiet street fifty yards from Parliament. There is a large garden in the back where our annual summer party takes place on the first Thursday of July. These parties are notorious for the scrum they produce, an overflow of every writer, hack, politician, and London characters imaginable. All prime ministers, at least since I’ve been there, attend regularly, although royals are never invited. Except for lunch. The Spectator’s lunches used to be notorious for the mix they produced. They are held in the elegant dining room and such diverse characters as Spiro Agnew, Prince Charles, Dame Edna Everage, Alger Hiss, Albert Speer, Dame Maggie Smith (whom I sat next to a couple of years ago and her first words to me were, “What in heavens is that pink thing you’re eating?”) join in the frivolity. Drink flows uninterruptedly, and when the legendary editor Clay Felker came over for lunch—he was looking for writers as he had just taken over Esquire—he asked me how was it possible for anyone to produce the magazine after all the drinking. (After lunch we took him across the street where the Speccie pub did a roaring business.) But despite all the drinking, the magazine has been produced for more than 9,000 consecutive issues and running.