It’s Dumb to Play in Traffic 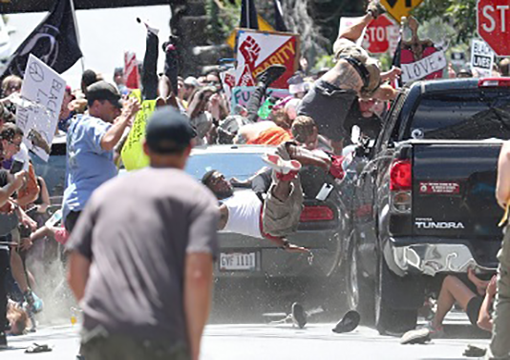 While leftist extremists continue to violently tear down everything they can get their dirty mitts on throughout the nation, their enablers in the mainstream press are warning us about yet another looming wave of white-supremacist far-right violence that, as usual, is almost entirely imaginary.

“Vehicle Attacks Rise As Extremists Target Protesters,” bleats the punishably clueless headline from NPR in an article which fails to target even one of these “protesters” as an “extremist” who targets hapless drivers who find themselves mobbed:

Right-wing extremists are turning cars into weapons, with reports of at least 50 vehicle-ramming incidents since protests against police violence erupted nationwide in late May.

And what is the evidence that NPR gives that the perps are all “right-wing extremists”? Good question. Out of the thousands of riots and beatings and dozens of murders that have transpired since late May, and out of the “at least 50” incidents of vehicle rammings, they were able to dredge up a total of ONE “avowed Klansman” who drove into a crowd in Virginia and slightly injured someone. It’s unclear whether or not this Klansman was being threatened before he drove into the crowd.

And that’s all it takes for NPR to falsely allege that this is an epidemic of right-wing extremist violence. Observe how they describe that these rammings take place in a complete vacuum and without the slightest provocation:

The footage follows a grim pattern: Protesters are shown walking peacefully when, suddenly, a car or truck appears in the frame and hurtles toward the crowd. People run, crouch and scream, “Oh my God!” Then the driver either manages to speed off or is surrounded and set upon by the outraged protesters.

I’ve witnessed dozens of these videos. What they just described does not occur in any of them. Down to the very last episode, it is the “peaceful protesters” who block a car’s forward progress by illegally standing in the street, mobbing the car, pounding at or smashing the windows, and ultimately dragging out the terrified driver for a beating.

During the LA riots in 1992, white truck driver Reginald Denny learned exactly what happens to drivers who stop and allow peaceful protesters who are venting their righteous rage about the devaluation of Black Bodies to engage them—they smash in your skull with a cinderblock and do a victory dance after leaving you with permanent brain damage.

Since they appear to have an insatiable appetite for “right-wing white-supremacist extremist violence” even though it’s basically extinct, they will use the fact that in Charlottesville, James Fields—who’d already been threatened at gunpoint and had apparently already endured multiple blunt-force attacks on his car—panicked and drove through a crowd and inadvertently caused Heather Heyer to have a heart attack as “evidence” that premeditated violent white-nationalist terror is the largest ideological and physical threat to the entire planet.

But they’ll overlook the fact that Muslims who weren’t being taunted or threatened by anyone deliberately drove their vehicles into crowds murdered 86 people with a truck in France, 12 people in Berlin, 16 people in Spain, 8 people in Manhattan, and 5 people in Sweden. You will hear endlessly about Charlottesville and “far-right white supremacist violence” and base ALL of their “research” on a handful of memes from a smattering of basement-dwelling video-game addicts from the same clowns who don’t dare make a peep about the far more numerous Islamist vehicle-ramming attacks and who received their inspiration from an article in Inspire, the English-language magazine of the Islamic State, which offered tips on how to achieve “maximum carnage” through vehicle attacks.

We’re way past double standards at this point and are somewhere in the realm of dodecahedral standards.

And why, pray tell, do they believe all these violent far-right white supremacists are wantonly targeting peaceful protesters? MEMES. Daily Kos, which to my knowledge has never been right about anything, not even once, calls those who are killed or injured by these rammings as “meme-fueled casualties.” That’s right—after all, before the infamous ramming attack in Charlottesville, James Fields had posted on Instagram that shows a car plowing through a group of people with the headline YOU HAVE THE RIGHT TO PROTEST…BUT I’M LATE FOR WORK.

It couldn’t possibly be that the immediate reason for why Fields slammed on the accelerator into that crowd was that he’d already been directly threatened. And it couldn’t possibly be that in most of these cases where people continue to drive while peaceful protesters are crawling onto their cars and trying to pull them out in order to beat them, the primary motivation was fear and panic. No—it’s memes.

Why do these people always seize the most improbable explanation?

She was a mother scared for life and her child. We ask at this time you find it in your hearts to understand when a mother is put in a position like this, you have to do what you can to save your baby.

After a white man was arrested in Florida for striking rioters with his vehicle, his son—who was in the car when it happened—explained to reporters that the peaceful protesters had attacked them:

Connelly’s son John Joseph Connelly…told police they were traveling north on South Main Street when a woman on a bicycle hit the vehicle and told them they could not go any further. Then, he said, a bottle struck the Kia and the crowd surrounding them tried to pull the vehicle doors open, the report said.

In Seattle—whose residents are locked in a struggle with Portlanders for the title of Worst White People in America—much was made of the far-right extremist who got out of his car, shot someone in the shoulder, and fled. Not a word was spoken about how the gunman was surrounded by people who were attacking his car, nor about the fact that his last name is Fernandez and he appears to be a black Hispanic.
When a white tranny was killed after a black driver plowed over him in Seattle recently, you can bet your sweet bippy that the streets weren’t suddenly overflowed with angry protesters demanding that drug-addicted African immigrants stop killing white transpeeps.
Writing for Slate and meticulously pointing out when the driver was white but avoiding any mention of race in the numerous cases when the driver wasn’t, Nitish Pahwa cites “a long history of racism and cars” and pens the single dumbest thing I’ve read all year:

I can’t think of a better retort to the person who sees a crowd of people protesting racism and wants to use their vehicle to stifle their righteous dissent: We belong on these streets, and your car doesn’t.

OK, for one thing, he’s assuming that stifling “righteous dissent” rather than “avoiding imminent danger” is the motive in the majority of these cases.

But people belong on sidewalks. Cars belong in streets. And it’s dumb to play in traffic.