It’s Not Your Grandfather’s Party Doll 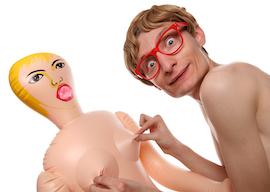 GETTYSBURG, Pa.—So I was planning to write a cute little feature article about the guys in Silicon Valley warning us that the sex dolls of the future are programmed to hug you and so there’s a danger of the code getting scrambled and they crack a rib or strangle you instead.

Little did I know that the future is now and the much-lampooned blow-up party doll is now the rechargeable Playboy Playmate. Right now you can buy sexually alluring robots that kiss, talk, hug, remember everything you tell them and incorporate it into their responses, wink, nod, turn their heads, talk dirty, make inarticulate sex sounds, writhe in ecstasy, and have orgasms. (Okay, they’re fake orgasms, but men never know anyway, right?) They even have “lifelike body heat” maintained at a constant 98.6.

The prices, if you’re wondering, are anywhere from $1,500 to $5,000. I’m not sure what additional features you get for the extra cash, or what features are lame if you go cheap, but if you’re going this route, I can’t imagine anyone skimping on the extras. The websites are all about the skin—the skin feels like real skin. They harp on the skin so much that these companies probably need to be investigated to find out if they’re robbing fresh graves. At any rate, the more stuff she can do, the more lifelike she is; and the closer you get to that deluxe $5,000 model, the better you’re able to sustain the male illusion that you have a girlfriend.

And because it is a male illusion—I found one high-tech male robot but he looks gay—I think we may be on the cusp of a final solution for the “incel” problem.

The incels are those guys who call themselves “involuntary celibates” because they consider themselves undateable because nobody could ever possibly want to have sex with them. (This is not true, but it’s a topic for another day. Nobody is undateable except those who make themselves so.) It would be easy to dismiss these guys and their misogynist chat groups—they blame women for all their problems—were it not for the fact that a few of them have gone off the deep end and committed horrendous acts of violence. The most notorious is Elliot Rodger, the 22-year-old Brit who killed six people and injured fourteen others with a knife, a gun, and a car during a daylong spree in Isla Vista, California. We know from the manifesto he published right before he killed himself that his motive was to murder beautiful women for not sleeping with him and sexually active men because he was envious of them. All of this could be explained as a mental disorder were it not for the fact that the Elliot Rodger Manifesto has made him something of a folk hero among his fellow incels.

“I think we may be on the cusp of a final solution for the ‘incel’ problem.”

So we have all these guys who believe that (a) all women are gold-digging whores, (b) they won’t sleep with me because I’m ugly, and (c) I want one of the gold-digging whores to be my girlfriend forever. I don’t think I’m exaggerating the twisted logic to say that all three parts of this are true, and I would even add a fourth one: (d) women I consider ugly—in other words, female incels—are not welcome. Then there’s another layer of emotion underneath all this, and it goes something like this: “That guy the beautiful girl is dating”—they call them Chads—“that Chad the beautiful girl is dating is an obnoxious creep, and she should dump him and love me because I would treat her better.”

All of these contradictory impulses could be solved overnight by figuring out a way to get the incel in touch with Maya, Michele, Angelina, Amber, Natalia, Olivia, Lucy, Julia, Summer, Grace, Mercedes, Victoria, Violet, Pearl, Coco, Marlin, Jasmine, Crystal, Cindy, Cheri, Britney, Anna, Agnes, or Monique. All of those are “off the shelf” sex robots currently for sale with various types of bodies and hair and, of course, vagina (shaved or unshaved). If I could generalize about what’s popular in this arena, it seems that men want a D cup, a petite girl (5-1 or 5-2, 70 to 90 pounds), long fluffy hair, a 23-inch waist, and a 6.6-inch-deep vagina. (Yes, it gets that technical.) If one of the standard models doesn’t satisfy you, there’s a “build your own” option to create that perfect life companion that, with proper maintenance, will never steal money, insult your manhood, or refuse sex. To the incel who says, “Well, no, I want a real woman who likes me for me,” the answer is, “Well, no, you don’t. You don’t even like yourself. This is better. This is a fake woman who likes the fake version of you.”

One thing you notice about the incel groups on Reddit is that they’re relentlessly focused on physical appearance. So, guys, here it is—pure physical appearance. The technology is pretty good right now and it can only get better. (The manufacturers offer free lifetime software updates as new features are introduced.) She’ll answer any question in a way that pleases you, and since she has a 24/7 Wi-Fi connection, you could probably teach the ungrateful bitch to like all your posts on Reddit.

The only thing you can’t do is slap her around (although I expect this to be incorporated into future updates—“Teach her who’s boss if she doesn’t laugh at your jokes”). There are some disturbing questions in the FAQs of these websites, all related to fears of your girlfriend falling apart on you, such as “Can you pull or bite on a robot companion’s nipples hard without fear of tearing them?” (The answer is “Within reason.”) And “What if I don’t fit?” (The answer is “Use a lubricant, she’s very elastic.”) And “Can a robot companion support itself enough to do doggy style?” (Answer: Yes, but either put pillows under the upper body or bend her over a table or chair.) And “Can I bathe or shower with my robot companion?” (Answer: Yes, but keep water off the head to avoid brain damage and the upper back to avoid damage to the charging port.)

One item that struck me as robot cruelty was the airline traveling case. If you want to take your girlfriend on the road with you, you have to power her down and fold her into a $400 compartment that won’t fit in the overhead bin, and she’s not entitled to ride with the dogs and cats.

And then there are even more frightening possibilities in the “things that could go wrong” category:

“What if a joint breaks?” (Call our technical department and they’ll send a replacement joint and stay on the phone with you until you successfully install it.)

“What if a finger wire pokes through the skin?” (Push it back inside the silicone and patch the hole with a silicone repair kit.)

“If I buy the suntanned version, will the tan ever rub off?” (Only with prolonged dry humping.)

“What if I accidentally rip her flesh?” (Commercial-grade silicone caulking can be found at your local hardware store.)

“Can I use cosmetics on my companion?” (Yes to liquid eyeliner, blush, eye shadow, powder, eyebrow pencil, and lipstick. No to oil-based or cream-based makeup.)

And this one is perhaps the most disturbing:

“Can I send my robot back to you for repairs?” (No, “due to health concerns for our employees.”)

In other words, they won’t touch the doll after you have touched the doll. This should make the incel happy because she can never be unfaithful. If you sent her back to the warehouse, who knows what random Chad the little slut might sleep with? It’s actually better this way. You’re the husband, the boyfriend, the doctor, the stylist, the Uber driver, and the greatest sexual athlete in the history of the world. Everybody wins. And young girls in Santa Barbara don’t get blown away by savage idiots.