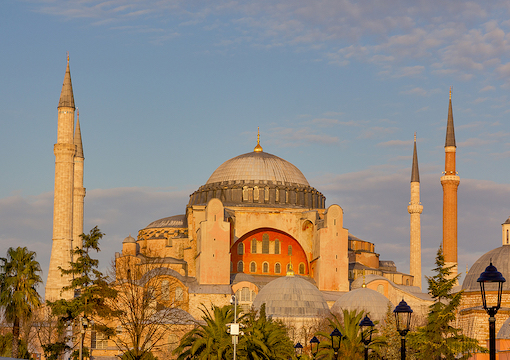 While the United States and China are locked in a new cold war that looks destined to shape the course of international politics for years to come, another, more regional power has become increasingly belligerent. Turkey under the rule of President Recep Tayyip Erdogan is looking to regain its position as the preeminent power in the Islamic world. The term for Turkey’s expansionism is “Neo-Ottomanism,” a reactionary form of politics that hearkens back to the glory days of the Ottoman Empire. President Erdogan, who has been in power in Turkey in one form or another since 2003, clearly sees himself as more sultan than democratic executive.

The most recent and troubling example of Erdogan’s Neo-Ottomanism is his stated aim to turn the Hagia Sophia into a mosque. For 1,000 years, the Hagia Sophia, which was completed in 537 CE under the reign of the great Eastern Roman (Byzantine) Emperor Justinian, has served as the heart of the Orthodox Christian world. The structure itself is a lasting testament to the unique genius of Greek Christian civilization, and the millions of visitors who flock to it are almost always dazzled by the incredible frescoes (or at least the ones not destroyed or desecrated by Ottoman Turks). Erdogan’s wish to remake the holy Christian church into a mosque is a blatant return to Ottomanism, as the Hagia Sophia did indeed serve as an Islamic house of worship between 1453 (the year the Ottomans conquered the Byzantine Empire) and 1934.

In 1934, Mustafa Kemal Ataturk, the creator of the secular Republic of Turkey and a man who believed in the primacy of Western civilization, decided to turn the Hagia Sophia into a museum. Erdogan wants to change all of that, and given his party’s long string of political victories, it would not be surprising if a Turkish court allows the measure to go ahead this summer. Plus, Erdogan’s regime has so far been successful in dismantling the remaining reforms of the Ataturk era: The failed military coup of 2016 provided the president with the ammunition needed to weaken the Turkish army’s traditional role as the defender of the secular constitution; Erdogan has successfully gutted Turkey’s free press; and the creeping re-Islamization of Turkish life and education has continued apace.

The West needs to be troubled by these developments, if for nothing else than the fact that Erdogan’s Neo-Ottomanism has imperialistic designs. 2020 has seen a quiet (insofar as the Western media is concerned) resurgence of Turkish military adventurism. Besides their recent incursion into Iraq (which even happened during Operation Iraqi Freedom), Turkish forces and their Syrian allies control a large swath of Syrian territory. Accusations of ethnic cleansing campaigns against Syrian Kurds have been lobbed at the Turkish army in Syria. Turkish forces are also gearing up for a showdown against the Egyptians and Russians in Libya, as both have chosen the opposite sides in that country’s long civil war. As of this writing, the Turkish-backed Government of National Accord is planning an offensive to take control of the strategic port city of Sirte, which is one of the oil hubs of the Mediterranean.

Besides the Turkish army, the auxiliary forces of Ankara include Islamist militias and ultra-nationalists known as the Grey Wolves. The Grey Wolves, which are closely tied to the Nationalist Movement Party (MHP), are the vanguard of Erdogan’s foreign and domestic policies. In November 2015, Alparslan Çelik, a member of a Syrian Turkmen militia as well as a member of both the MHP and the Grey Wolves, shot down a Russian Su-24 jet, killing two Russian pilots. Another suspected member of the Grey Wolves, Adem Karadag, killed twenty and injured 120 people in Bangkok when he detonated a bomb at the city’s famous Erawan Shrine. The attack was done to avenge Thailand’s deportation of 100 Uighurs, a Turkic and Muslim people, to China. Grey Wolves have done damage in Turkey, too, playing significant roles in the Taksim Square riots of 2013, the Gazi Quarter riots of 1995, and the Beyazit massacre of 1978. Most infamous of all, Turkey’s “deep state” controversy, known as the Susurluk scandal, provided proof of the Turkish government’s collaboration with the Grey Wolves in everything from narcotics distribution to ethnic cleansing campaigns in the Kurdish-majority regions of Turkey. As for the Islamists, Turkish troops are currently giving them direct assistance in Northern Syria, which is at least a change from Erdogan’s more covert support for ISIS.

Neo-Ottomanism is not just a force to be reckoned with in the Muslim world, either. Turks no longer wait outside of Vienna’s gates. They are already inside the city, having taken it not through conquest but through immigration. A 2019 census taken by the municipal government found 76,355 ethnic Turks living in Vienna, thus making them the second-largest population of foreign residents behind Serbs. Vienna’s Turks do not seem to be assimilating and are being encouraged toward demographic conquest. Three years ago, Erdogan told his constituents in the Turkish city of Eskisehir that they were the “future of Europe.” Erdogan further told his supporters to “live in better neighborhoods…drive the best cars,” and, most startling of all, have multiple children in Europe as an act of revenge. Only a few weeks ago, the brutality of Turkish politics played out on the streets of Vienna, where Grey Wolves fought running battles against Antifa and Kurdish supporters of the terror group PKK (Kurdistan Workers’ Party). Vienna isn’t the only city impacted either, as Berlin, Amsterdam, and even Washington, D.C., have experienced interactions with the wannabe sultan’s goons and their Kurdish opponents.

The West, or rather Christendom, needs to finally stand firm against Neo-Ottomanism. Erdogan’s foreign policy is explicitly anti-Christian and anti-European. It also does not bode well for Arabs, whether Muslim or Christian. Sultan Recep I should be humbled before it’s too late. The Hagia Sophia alone is worth protecting.