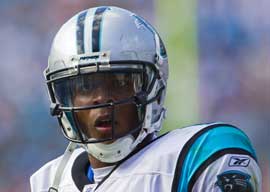 Superstar NFL quarterback Cam Newton is black, and even though many people loudly insist that shouldn’t matter, it is precisely those people who are always making a preposterously huge deal of it.

Chief among these offenders is Mr. Newton himself, who last Wednesday told reporters at a press conference that the reason he sometimes faces criticism is not because he’s a high-profile sports star and all of them sometimes face criticism”no, it is clearly his status as a Negroidal American that inspires the negative comments:

I”m an African-American quarterback that may scare a lot of people because they haven”t seen nothing that they can compare me to.

In truth, I’ve seen thousands of people I can compare him to”namely, African Americans who deflect any possible criticism by blaming it on racism. I’ve seen this for two generations and counting.

The following day, ESPN Radio host Bomani Jones“a black man who approaches black issues from a black perspective in the blackest way he knows”said that Cam Newton makes many white Americans uncomfortable because he is not a shuffling and compliant goody-two-shoes black man but rather an unapologetically “blackety-black” man. Jones opined that there has been a “historical lineage that indicates a lot has been done to keep black people from playing quarterback” and that the “simple reality” is that our wicked nation “does not like black people very much.”

“I’ve seen thousands of people I can compare him to”namely, African Americans who deflect any possible criticism by blaming it on racism.”

USA Today published an article on Newton’s blackety-blackness that featured a quote by Doug Williams, the former Washington Redskins quarterback who in 1988 became the first black quarterback to win a Super Bowl. Williams constructs a self-contained logical Guilt Loop wherein anyone who dares to criticize Newton is in denial of their racist motivations:

Because at the end of the day you”ve got a lot of people denying (racism is behind the criticism of Newton), that that’s not true. Even if it’s true, they”re going to deny it.

If we”re brutally honest with ourselves, the criticism of Newton comes from somewhere ugly and mean, based more on prejudice than a wish for proper decorum.

I’m being brutally honest with myself, and I think you’re out of your fucking mind.

The same article quotes an alleged journalism professor who apes Doug Williams’s assertion that even when people say that they don’t have anything against Cam Newton because he’s black, it’s quite obvious that they’re lying:

The New York Times congratulated Newton for making it all about racism, which the Old Grey Lady insisted is “our country’s most persistent and vexing problem.” It compared Newton’s brash style to that of Muhammad Ali.

For an example of the horrifying racist abuse Newton has endured, the Times cited an Instagram photo he’d posted that some commenters had the gall to suggest depicted him and his friends as thugs. Look at that picture and tell me how anyone in their right mind would think that a group of black men wearing bandannas over their faces while pointing at the camera as if they were aiming guns at it would qualify as “thugs” under any sensible definition. I mean, it’s 2016, people.

Yahoo! Sports features an article titled “What Cam Newton Is Criticized for Doesn’t Apply to White Quarterbacks,” claiming without any evidence that when white players perform an elaborate post-touchdown boogie-oogie-oogie celebration dance they are not called “thugs” like black players are.

Counterpunch weighs in with a solemn editorial about how Newton’s unprecedented success merely provides “white folks” with yet another excuse to vent their toxic hatred:

Most white folks want entertainment, but they don”t want the help acting too uppity. That’s why Cam Newton is the kind of black athlete white folks tend to hate….Cam’s authenticity is confrontational in how it forces white supremacy to come to terms with his athletic brilliance…and brilliant he is.

With all these editorials about the dump trucks full of racist abuse that are poured upon young Mr. Newton’s head daily, I was sorely disappointed to find almost no evidence of this alleged abuse. One tiny little cracker crumb that was repeatedly cited as a sign that white people just can’t handle Newton’s overwhelming blackness was a letter a woman from Tennessee wrote to the Charlotte Observer after she and her nine-year-old daughter witnessed Newton’s post-touchdown shenanigans live and in person:

Because of where we sat, we had a close up view of your conduct in the fourth quarter. The chest puffs. The pelvic thrusts. The arrogant struts and the “in your face” taunting of both the Titans” players and fans. We saw it all….You have amazing talent and an incredible platform to be a role model for them. Unfortunately, what you modeled for them today was egotism, arrogance and poor sportsmanship.