It’s in Their Culture 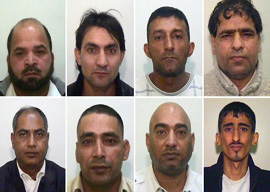 But let’s face it: Many, many Muslims do think that non-Muslim white women are sluts and the perfect symbols of Western decadence and that this is a core reason why they do not (how shall I put this?) approve of Western civilization and therefore why they would like it to be run along Islamic lines, just as the Islamic terrorists do, even if personally they do not actively support al-Qaeda, et al. Not in public, at least.

The crimes committed by those nine Muslim sexist racists in Rochdale, a former mill town and once the pride of Britain’s textile industry, included multiple counts of rape and sex trafficking. The gang members, many of whom were taxi drivers, enticed the teenage girls to go out on the town with them by plying them with free alcohol and drugs. They would then pass the girls around to have sex with several men a day, several times a week, in taxis, flats, and kebab shops. One 13-year-old was forced to have sex with 20 men in one night.

In 2008, the police and the social workers had evidence of these terrible crimes. But they did little mainly because to do something would have meant criticizing the British Muslim community of Pakistani origin. Terrified of being accused of racism”an accusation that could easily have destroyed their careers and led to criminal charges against them as well as civil unrest”they turned a blind eye.

Even now, the metropolitan chattering classes and the multicultural freak-show crowd that control the media still insist that the Rochdale case has nothing to do with race.

Let’s not forget the sexism. This racism and sexism were rooted in the religion of the nine men, Islam. To do the same thing to Muslim girls, on the other hand, would have been for them unthinkable.

They all pleaded not guilty on the grounds that they had done nothing wrong in their eyes and were thus were brought to trial only because of their race and religion. One was banned from court after he called the judge “a racist bastard.”

At least Nazir Afzal, the Chief Crown Prosecutor in the northwest who eventually brought the case and who is of Pakistani origin and a Muslim, had the balls to say after the trial that “imported cultural baggage“ had played a role, although he carefully avoided the word “religious.” Regardless of how you define it, that baggage involves among other things forced marriage, honor killings, and genital mutilation.

But still the metropolitan chatterers and the multicultural freaks refuse to concede defeat. They chant their tired old mantra: Sexual exploitation of teenage girls happens in every racial and ethnic group. Oh no, it doesn”t! Not on this scale against girls chosen precisely because they came from a different racial and religious group. And if nine non-Muslim white men did the same thing to dozens of Muslim teenage girls, British Muslims would blow up the Houses of Parliament and Buckingham Palace. And that would only be the first course.

It is time that the left abandoned its multicultural diktat of turning a blind eye to such disgusting racism and sexism by nonwhite men simply because “it’s in their culture.” And it is time for the rest of us to look after vulnerable white non-Muslim teenage girls a little better than this.