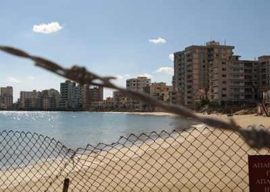 So you feel worn-out by the never-ending “peace process” involving two ethno-religious communities and their competing claims over a disputed territory.

And you are not surprised to learn that the latest round of peace processing has ground to a halt.

But never give up hope—President Dimitris Christofias of Cyprus is under international pressure to deliver a peace blueprint when he and Turkish Cypriot leader Dervis Eroglu meet UN Secretary-General Ban Ki-moon in October. But ever since UN-sponsored peace talks restarted in September 2008, there has been no evidence of progress. And the “international community” is impatient.

Substitute “Christofias and Eroglu” with “Abbas and Netanyahu,” and you may be forgiven for imagining that you were watching an Arab-Israeli film being dubbed into Greek and Turkish.

Reports about the most recent ups and downs in the negotiations over Cyprus sound familiar to professional peace processors who have been trying to resolve the Israeli-Palestinian conflict for most of their careers. To paraphrase what Mark Twain said about the weather, everyone talks about the dispute over the Holy Land, but nobody is able to do anything about it.

“The reason it is sunnier in Nicosia than in Jerusalem can be summarized in one word: partition.”

But notice the dissimilarities. Every time Bibi and Abu Mazen go on a date, the “international community” is in danger of suffering a diplomatic aneurysm. Yet no one in Washington will be holding their breath when Christofias and Eroglu meet in October.

Moreover, while the cycle of political violence in the Holy Land ensures a regular supply of widows and orphans, most deaths in Cyprus result from natural causes, car accidents, or street violence. Occasionally, the leaders of Turkey and Greece make some noise about Cyprus and the UN urges the two sides to make a deal. But no one seems worried that the failure to reach a peace agreement will trigger a military conflagration.

The fact that Cyprus has not received as much attention as Israel and Palestine may confound the proverbial Man from Mars touring the two tiny tracts of land in the eastern Mediterranean where descendents of old civilizations quarrel over ownership of ancient sites that are part of their national legends.