Ivana Lowell Bites the Silver Spoon That Feeds Her 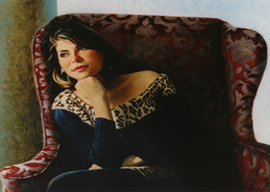 Guinness heiress Ivana Lowell has released her memoir, Why Not Say What Happened? I”ll tell you why: It’s a bore. A rich and privileged kid’s twisted family history. The story of a dysfunctional childhood. We”ve heard it a thousand times. Frankly, who gives a shit?

Here it is in a gilded nutshell: Ivana is a descendant of the 1st Marquess of Dufferin and Ava, a Governor General of Canada and Viceroy of India. She’s the granddaughter of Maureen, Marchioness of Dufferin and Ava, the Guinness heiress. Her mother was the alcoholic Lady Caroline Blackwood, who married Sigmund Freud’s grandson Lucian (the painter), then composer Israel Citkowitz (Ivana’s putative father), and finally Robert Lowell, the alcoholic and manically depressed poet (her stepfather).

Ivana was sexually abused as a child and later had a pubic-hair transplant. Her sister overdosed on heroin. She had an affair with the rebarbative Bob Weinstein (the “good-looking” Weinstein brother). At 32 she discovered that her real father was Giant screenwriter Ivan Moffat, her mother’s occasional lover, who was not a particularly nice man, it is written. Have I said Ivana also went to rehab?

I don”t get it. She’s a low-life Guinness, an aristocratic Lindsay Lohan without the possibly interesting interlude of jail time. A Brit Paris Hilton, of note only because of her pedigree. She has done nothing, it would appear, to warrant any reader’s attention. Her book is an upper-class Mommie Dearest for those with a Debrett’s Peerage close at hand.

“You know, I”m tired of books in which the silver-spoon descendants of rich and distinguished families trash their ancestors.”

We”re only eight pages into it when we read, “My great-grandfather the honorable Arthur Edward Guinness was by all accounts an unattractive character. I have heard many stories that illustrate his extravagant and boorish behavior.”

You know, I”m tired of books in which the silver-spoon descendants of rich and distinguished families trash their ancestors. It’s called “lese-majesty,” an outrage upon the dignity of dead relatives unable to defend themselves. The primitive, naked Bakota Negroes of Eastern Gabon had more respect for their ancestors.

I”ll bet you I can find out something nice about the Honorable Arthur Edward Guinness faster than you can find a bedbug in Spanish Harlem. Too late”I had a peek at Wikipedia, and it turns out he was a noted philanthropist who gave St. Stephen’s Green to the people of Dublin. Chalk one up for the ancestors.