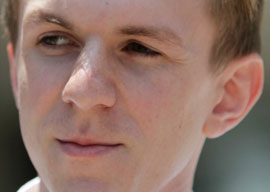 James O’Keefe’s new book Breakthrough is a spine-tingling true-crime thriller about the quest for truth in the age of media obfuscation. I love reading Coulter and Mark Steyn, but they don’t get out much.

O’Keefe and his organization Project Veritas are out there on the front lines recording the corruption live. The book begins with James in jail wearing an orange jumpsuit and wondering what the fuck just happened. We soon learn that the James O’Keefe we’ve been spoon-fed by the media is not even close to the real person and that the things we’re told he did aren’t even close to what really happened. O’Keefe recorded events and released the footage in full to the public, yet he’s called a liar while his detractors make up stories about him that are accepted as fact. As usual, what you read in the paper is the opposite of what’s really happening. I recently interviewed O’Keefe, and here are ten misconceptions about Project Veritas’s renegade reporting.

1. PLANNED PARENTHOOD EXPOSED AS RACIST
In 2008, James contacted Planned Parenthood and asked if he could donate money specifically to visible minorities in order to encourage their abortions. They said yes.
Detractors say: This was an isolated incident and immediately after the visit, the employee called his superiors.
James’s defense: “The ‘isolated incident’ defense is the most common one. So is the ‘low-level employee’ defense. In this case, they couldn’t use the latter because the vice president was on board. The truth is, Planned Parenthood was founded as a racist organization and it focuses on black areas. Founder Margaret Sanger was tied to the eugenics movement and said we need ‘drastic and Spartan’ measures to stop an ‘ever increasing army of undersized, stunted, and dehumanized slaves.’ She also said, ‘We do not want word to go out that we want to exterminate the Negro population.’ All we did was show that things over there haven’t changed much.”

“The James O’Keefe we’ve been spoon-fed by the media is not even close to the real person.”

2. ACORN HAS NO PROBLEM HELPING PIMPS
In 2009, James and Hannah Giles walked into various ACORN offices and asked for help setting up a brothel. They explained that he was a pimp and she was his bottom bitch.
Detractors say: They posed in ridiculous pimp and ho costumes for the press photos, but that’s not what they were wearing at the meetings with ACORN. Also, if James isn’t guilty of a crime, why did he settle out of court?
James’s defense: “First of all, who cares if I wasn’t wearing a fur coat during the tapings? What matters is ACORN tried to help me start a brothel. Their employees shouldn’t be one coat away from a bad decision. As far as settling goes, I tried to defend myself, but privacy rights are a very ambiguous area of law and it was looking like a million-dollar fight that would have cost me years in court. I cut my losses because I had no other choice.”

3. JAMES O’KEEFE IS NOT A RAPIST
In 2010, when James was contacted by CNN, he decided to do a parody interview with them because he knew they didn’t take his work seriously anyway. (They called the first ACORN video “isolated” even though there were many of them.) He developed a scenario that included a yacht and champagne and was going to portray himself as a ridiculous playboy character for a laugh.
Detractors say: James O’Keefe planned to rape a CNN reporter and film the whole thing. He chickened out. It’s all listed in emails he sent back and forth to colleagues.
James’s defense: “What? Who would film themselves committing a rape? The emails never said that and for the record, I wasn’t happy about many parts of those emails. They were not my plan and I had no intention of doing anything more than waste their time Ã  la reporters on The Daily Show. Not my greatest idea, but not even in the same universe as what the detractors say was going to happen.”

4. N.J. TEACHERS CAN’T GET FIRED
Also in 2010, James and members of Project Veritas went to a teacher’s union meeting and talked to teachers who were gloating about how hard it was for them to get fired. One said you’d have to be caught fucking a student and another said you’d have to say “nigger.”
Detractors say: Actors staged fake conversations.
James’s defense: “The journalists didn’t say they were journalists, but the teachers really did say those things and one of them was suspended after admitting it was her on the tape. They weren’t ‘fake conversations.’ They were undercover recordings. Unfortunately, once they call our guys actors, the whole thing is portrayed as a play.”

5. MARY LANDRIEU MIGHT HATE THE TEA PARTY
Also in 2010, James and three others from Project Veritas gained entry into the US Senator from Louisiana’s office claiming to be telephone repairmen. James had heard Landrieu complaining about Tea Party activists clogging her phone lines, and he wanted to catch her bad-mouthing her constituents off the record.
Detractors say: James broke into her office and tried to bug her phone lines illegally.
James’s defense: “I had no intention of bugging her phone lines but for the sake of argument, why is the mainstream media so worried about politicians’ rights? Why are they sticklers for the law all of a sudden? If you want to get into the specifics of what I legally did wrong, I told a receptionist I was waiting for someone when in fact I wasn’t. That was my crime. This was twisted into a situation where we have a federal judge pressuring the magistrate by filing a motion days before my sentencing, implying I could have killed a judge in the federal building. What nobody knows about this case is that the judge, Magistrate Daniel Knowles III, had the footage deleted so I couldn’t even defend myself properly. The legal community called the whole twisted case ‘highly unusual.’ All I wanted to do was catch her off-guard, but we were charged with entering a federal building under false pretenses and I got three years’ probation, which meant I was prohibited from leaving the state. Drug dealers are treated better for misdemeanors like that.”