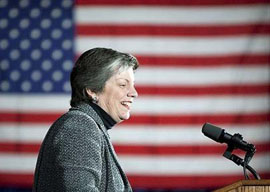 Janet Napolitano, secretary of homeland security—Big Sis to regular readers of the Drudge Report—held a press conference last week that might cause critics to reconsider their views.

The 2010 deportations represent an increase of 81,000 over the number in George W. Bush’s final full year in office.

More important, half of the deportees, 195,772, had criminal arrests. Of these, one-third had committed serious felonies such as murder, rape and major drug offenses. If these figures are precise, Napolitano’s Department of Homeland Security ran the equivalent of five army divisions of criminal aliens out of the United States.

In making deportation decisions, said Napolitano, we focus on “removing those who pose public safety threats to our communities.”

Not only is this a fine record compared with the Bush administration, Napolitano’s priorities, criminals out first, are what immigration reformers have demanded for decades.

Yet, the report on Napolitano’s press conference was buried in The New York Times, which raises a question. Why has the White House not itself been boasting about this record? For this crackdown, of which Hispanic communities are surely aware, seems not to have dented Barack Obama’s popularity in the barrio.

The Democrats’ problem among Hispanics is apathy.

From a new Pew poll of Hispanics, The Washington Post reports: “There is good news and bad news for Democrats. … Latinos support the party, but about half of those questioned say they might not show up at the polls on November 2.”