Jeremy Corbyn and the Politics of Conspiracy 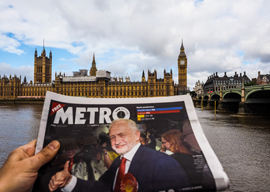 We live in an era where fake news is real, and real news is fake. A recent furor in the U.K. concerned the involvement of Cambridge Analytica—President Trump’s favorite data jockeys—on the Leave side of the E.U. referendum. Overspending! Collusion! Betrayal! The Observer drew itself up to its full height—imagine a kind of moral Danny DeVito—and fulminated that Democracy Dies Without Transparency.

Apparently our freedoms had finally flatlined when Cambridge Analytica—cast as the overall Svengali of the Leave campaign—had helped channel work to a small Canadian data-muncher called Aggregate IQ; and done so in order to break spending rules. This conspiracy was outed by a leather-jacketed Observer journalist live on Sunday-morning TV. The bien-pensants pushed away their muesli in disgust that people with computers had weaseled us out of the West’s last bastion of democratic values, the European Union.

Cometh the next edition, cometh the retraction. “For the record”—buried on page 50—“we did not intend to suggest that AIQ secretly and unethically coordinated with Cambridge Analytica.” For posterity, let it be remembered how a left-wing British newspaper does not suggest such a thing; with the words, “it is already established that Aggregate IQ is linked to Cambridge Analytica through IP agreements; this weekend…alleges that the links between the two go much deeper, such that their activities became confused.” Deep and confusing, yes. Secret or unethical, no. Got that? Neither have I.

“Shortsighted and cynical though Corbyn may be, his fall could still be the grenade that blows up British politics.”

While still giddy with its own investigative brilliance, the paper had further trumpeted that election rules are about achieving a “level playing” field under conditions of “openness and transparency.” So what about looking at the millions in tax money that were poured into the Remain campaign? That idea was dismissed from the outset on the—somewhat contradictory—basis that this “wasn’t a party political issue.” It remained for the right-leaning Spectator to drill into the real issue of data analytics: namely how the connected home will allow us to be micro-targeted with political messaging. Grouchy because you haven’t eaten for a while? Time for a message from a demagogue. Smug from having put out the recycling? Time to hear from an environmentalist.

The above cycle of loud claims and quiet retractions is amplified by social media. Accusations take off like wildfire, while their corrections splutter like a November barbecue. This asymmetry is quietly abetted by mainstream campaigns becoming ever more invested in the paranoid politics of conspiracy. The U.S. leads the world in this regression toward flat-earthism. Its original architect was Hillary Clinton, who managed to convince her base that negative stories had nothing to do with her faults—she didn’t have any—and everything to do with a VAST right-wing media conspiracy. With heady claims of an election-rigging now rebounding on the Democrats, the rest of the world has stopped trying to keep up.

In Britain, the Labour Party under Jeremy Corbyn has been stress-testing the politics of conspiracy to their limits. When he soft-pedaled on Russia over the Salisbury poisoning, a BBC discussion program used a montage backdrop of him against the Kremlin. Rather than responding to Corbyn’s doe-eyed public embrace of authoritarianism, his supporters dropped a massive red pill on the public: The reactionary stooges at the BBC had Photoshopped his fisherman’s cap to make it look more Russian! The ensuing “Hatgate” discussion actually took over the news agenda—yes, really—forcing the BBC to dignify the accusation with a denial. Meanwhile, anyone who knows left-wing semiotics was left wondering how a “Lenin cap” could be made to look more Bolshevik than it does in its natural state.

Now it appears Labour’s curated suspension of disbelief is finally collapsing. The inflection point has been Corbyn’s long-running anti-Semitism bursting into the open with revelations that he posted approvingly about a Protocols-of-Zion-style public mural. It showed plutocratic Jews playing Monopoly using a board balanced on the backs of good honest volk, with a bit of Masonic imagery thrown in for good measure. When its removal was scheduled—and the “artist” started bleating about his free speech—Corbyn reassured him that it was a “very beautiful piece of art.”