Jesus Returns (in a Tour Bus) 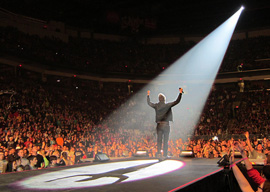 Christian rock is just like any other music that sucks, except it’s played for Jesus. The other night I peeked into our local arena and found it filled to max capacity for the “Winter Jam 2012 Tour Spectacular.” Maybe Jesus really is coming back…in a tour bus.

To everyone’s surprise, Winter Jam was the #1 best-selling (though not top-grossing) tour of 2011’s first quarter and is selling out arenas again this year. Is it because Winter Jam only charges $10 at the door? Has Christianity finally become “cool,” or are these kids merely too young to stay out late for real rock shows?

Maybe this is only another pious fad, but as talented artists are rapidly being phased out in favor of hi-tech production techniques, it seems that Christian pop is actually improving in quality. It meets the mainstream in some mediocre limbo of soul-shaking sound systems and mind-numbing repetition. I’ve worked arena shows for years”from rock, rap, and country concerts to corporate, sports, and political events. Sensory overload is essential to modern entertainment.

“Christian rock is just like any other music that sucks, except it’s played for Jesus.”

Now in its 17th year, Winter Jam proves that quasi-Christ can use the Machine just as effectively as any other prosthetic god. This glamorous incarnation wears a curlicue hipster ‘stache and gauged piercings in his palms. The lambs at his right hand hang the lights and sound while he parties backstage with two hot Marys and a groupie named Martha. As he dazzles the audience with pyro miracles, the goats at his left hand count up the money.

Throughout Winter Jam’s four-hour show, unoriginal rhythms and derivative vocals are woven into a cacophony of clichÃ©s laced with “God is the light,” “Praise be to your name,” and “Glory hallelujah.” Spotlights shine on meticulously primped prophets wearing gelled faux-hawks and guy-liner. The performers praise Jesus as though he’s some pagan deity who suffers from self-doubt and a chronic lack of attention. When celibate sex symbol Kari Jobe sings, “I know that you have come now” to her Lord, I wonder if her boyfriend gets a little jealous.

The MC yells, “Make some noise for Jeeesuuus!!” The crowd screams as the next band takes the stage.

Two thousand years ago, a very different Jesus preached his Sermon on the Mount, in which he said:

Beware of practicing your piety before others in order to be seen by them…But whenever you pray, go into your room and shut the door and pray to your Father who is in secret…do not heap up empty phrases as the Gentiles do….

Every time I walk into a billion-dollar mega-church or watch a televangelist hawk salvation, I wonder how many holy rollers actually read the Bible”and if so, which parts? Do they just skip over the Sermon on the Mount? In a material, power-driven world, I can’t blame any human being for not living up to Jesus’s teachings of humble self-negation, but it’s as though these hucksters go out of their way to do the exact opposite.