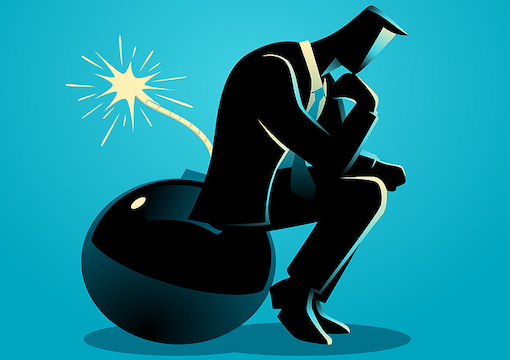 On Sept. 27, 1979, professional Holocaust survivor Elie Wiesel presented his formal report to President Jimmy Carter regarding the establishment of a Holocaust memorial and museum in Washington, D.C. The previous year, Carter had authorized the endeavor, and he’d tasked Wiesel with crafting a report outlining the museum’s scope and purpose.

The Holocaust had been over for almost 35 years. It had not taken place in America, or as the result of American policies. Some of the camps had been liberated by the U.S., a nation that lost several hundred thousand sons fighting Hitler. Many Holocaust survivors found a fine postwar life in America, and those who lived in Israel could count on U.S. protection against that country’s enemies.

If Washington, D.C., needed a Holocaust museum, and that’s debatable, surely the American people needed no lectures on culpability.

Wiesel disagreed. In his report, he attacked America for not having “changed our immigration laws and opened our gates more widely” to save Jews during the Holocaust (a nonsensical point, as the Polish and Russian Jews who were the main victims of the Holocaust were not allowed to emigrate regardless of whether any nations would’ve accepted them). Having established American “guilt,” Wiesel proceeded to lay down the law, using, as he did throughout the report, capital-E “Event” to represent the Holocaust:

“Like it or not, the Event must and will dominate future events.”

Yes, Americans, “like it or not,” the Holocaust “must and will dominate future events.” Everything you do, everything you accomplish, everything you say or think, will be dominated by this one event that you had absolutely nothing to do with. Wiesel didn’t mince words: The Event’s “centrality in the creative endeavors of our contemporaries” must be undisputed.

And then Wiesel went for the kill shot: “Why not forget, turn the page, and proclaim: let it remain buried beneath the dark nightmares of our subconscious,” he asked. His answer? We must “not spare our children the weight of our collective burden and allow them to start their lives free of nocturnal obsessions and complexes, free of Auschwitz and its shadows.”

American children must not “start their lives free of nocturnal obsessions and complexes.” Let that sink in.

America has a new capital-E Event: slavery. And this new Event “must and will” be “central in the creative endeavors of our contemporaries.” Once again, our children must be terrorized with “nocturnal obsessions and complexes.” BLM terrorists have quite clearly stated that the motivation behind their targeted terror riots is to instill fear in whites. Much as Wiesel loved to terrorize Jewish kids into thinking the Nazis were coming for them anew, and gentile kids into thinking that somehow they were responsible for the human skeletons at Belsen, so BLM loves to terrorize black kids into thinking that “racism” could kill them at any minute (because they’re no “freer” than their slave ancestors), and white kids into thinking that their inborn “privilege” makes them complicit in the death of every black person anywhere.

Wiesel was too egotistical and shortsighted to envision a day in which a young, energetic, and numerically larger (though far less wealthy) nonwhite demographic would use its own long-ago oppression event to gain the influence over whitey that the Jews had in his day. And now Jews are bitching that blacks and their Event are taking over their racket. “Why can’t you get canceled for anti-Semitism?” wept Bethany Mandel, Twitter-superstar wife of the Washington Examiner’s Seth Mandel. I think she meant, “Why can’t you get canceled for anti-Semitism anymore?” And you can, just not with the severity of cancellations demanded by BLM. Similarly, Jewish News Syndicate editor Jonathan Tobin penned a lengthy screed about how tragic it is that blacks have supplanted Jews as the “untouchable” victim group.

This passing of the torch was perfectly symbolized last week in New York’s 16th District primary race. Jewish incumbent Eliot Engel, who’s taken every opportunity in his 40-plus-year political career to push his capital-E Event with proclamations, photo ops, and demands for more “commemoration,” lost to BLM radical Jamaal Bowman, who campaigned on his capital-E Event.

The Jew and his Holocaust got shown the door, as the black man and his slavery claimed the seat.

The students have eclipsed the teachers. Black Americans know the Jewish playbook word for word, because Jews have always been their instructors in academia and their patrons in the media. Jews cofounded most of the large civil rights organizations, taught “revolutionary dialectics” at every worthless degree factory, and hired most of the illiterate black hacks in legacy media. Jews have empowered the worst of the black community and encouraged its most destructive obsessions.

Jews have experience with the kind of hell they’re forging here. The Israeli/Palestinian conflict is defined by its intractability. The unbending demands of both sides make the problem unsolvable. The Palestinians will never give up the “right of return,” and they’ll always want Jerusalem. The Israelis will never allow a “right of return,” and they’ll never give up Jerusalem. And both sides continue to increase the intractability daily, via terror attacks and IDF reprisals, just to make sure that new vendettas prevent the old ones from being forgotten.

No solution…just two sides beating, killing, and terrorizing each other for all eternity.

Here in the U.S., black/white conflicts never had to be similarly intractable. For blacks, it was never about land; many if not most were happy to flee the South after slavery. To be sure, there were always going to be issues—nature and nurture issues in the black community (the latter exacerbated by government policies), employment imbalances, educational imbalances. But none of those things were deal-breakers; there never had to be a permanent state of conflict between black and white.

But today, black/white issues in the U.S. are fast becoming intractable, because black demands have become impossible. Not just impossible to accede to, but impossible to understand. There’s no logic to BLM, only a desire to destroy and terrorize. There was no logic in destroying the historically Jewish Fairfax District of L.A., there’s no logic in toppling statues of abolitionists and freed slaves and defacing busts of Ulysses Grant and Cervantes. There’s only hatred. When Beverly Hills was being sacked last month, that’s what got to me—the hatred in the eyes of the rioters. And the lack of any “moderate” blacks in L.A. saying, “Stop it, this isn’t the way.”

It’s not that all members of the black community have decided to embrace jihad (jihood?), but enough have. And for any conflict to become intractable, you never need “all,” just “enough.”

How did things get this bad? It’s that old fool Wiesel’s playbook. This is the inevitable result of the black capital-E Event becoming dominant in all aspects of American life. That was the point of the New York Times’ 1619 series, written by functional illiterate Nikole Hannah-Jones, a talentless scribbler who, without her Jewish overseers, would be performing “mama got a big ol’ booty” raps on TikTok. Slaves “built America,” so therefore anyone living in America owes the descendants of slaves. Do you like sugar? Well, you wouldn’t if not for slavery. Therefore, you owe (Jones made that point specifically). Indeed, Jones has proudly referred to the current unrest as the “1619 riots.”

Like pimps, blacks are terrorizing whites because they been holdin’ out.

BLM radical and former Obama administration official Allyn Brooks-LaSure made a similar point in a recent correspondence. After claiming that “at one time, 80 percent of the world’s cotton was picked by American slaves,” Brooks-LaSure went on to state that this makes everyone, everywhere “beneficiaries” of slavery.

Basically, if anyone in your family tree ever wore a cotton shirt, you owe (LaSure’s organization, the Leadership Conference on Civil and Human Rights, was cofounded by National Jewish Community Relations Advisory Council chief Arnold Aronson).

When Wiesel and his ilk tried to make the Holocaust the dominant event in American life, it was a scheme carried out by an already affluent community. Jews didn’t need Holocaust guilting as a tool to achieve economic and educational successes; they already had those successes. Holocaust domination was partly an exercise in egotism, partly an exercise in ensuring certain legislative victories (as in, aid to Israel), and partly a way to have an edge in any situation where victim status provides an advantage.

But with blacks, you have a far less successful community that thinks it can somehow use its capital-E Event as a cure-all for its failings. Whites “owe” blacks the successes they could not achieve on their own. At least Jews used Holocaust guilt to deliver attainable goals (aid to Israel, speech censorship, museums, Oscars). Blacks are using slavery guilt to demand the impossible (“make our community rich, smart, and successful!”)

There’s no chance of a satisfactory outcome here. Whites can acquiesce to every demand, they can enforce hiring and college admissions quotas and only watch “black” movies and live in unpoliced cities and turn a blind eye when blacks shoplift and mug, but it won’t make blacks better at STEM or black families more stable or black communities less crime- and drug-infested.

What makes the current black/white conflict more intractable than the Israeli/Palestinian one is that American blacks don’t feel that they’re entitled to land…they feel that they’re entitled to us. Their “claim” is to the people they believe profited from their ancestors’ misfortune. They want us to “make it all better,” but we don’t have that power. It’s a child’s demand, and there are no longer any parents in the room to say no.

Not surprisingly, black leaders are as shortsighted as Wiesel. Their capital-E Event might be the dominant one right now, but blacks continue to vote overwhelmingly for open borders (the ones Wiesel pined for) and the mass importation of brown folks who don’t give a rat’s ass about Jewish or black Events.

As blacks turn on Jews and rob them of their most favored victim status, eventually our emerging brown majorities will do the same to blacks. In the past three decades, L.A. County has lost almost 200,000 blacks solely because they were squeezed out by immigrants who live and hire tribally and can’t be guilted by a capital-E Event into acting against their own interests. L.A.’s cold brown shoulder is the future for blacks nationally, especially if they continue to rely on slavery reparations as a substitute for actual self-betterment.

For Jews, and the blacks who followed in their footsteps, the Wiesel playbook will turn out to be a suicide pact.

Or a suicide bomb, because a lot of innocent bystanders are gonna be taken out along the way.