Jewish Spies Through the Years 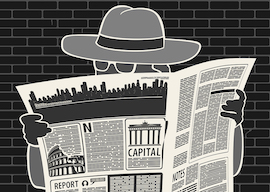 As the political races of 2020 emerge, we’re going to see some remarkably weird and hilarious ads. The first to receive that nod belongs to Valerie Plame. The former spy has filmed something that looks less like a candidacy announcement and more like a reboot of Jennifer Garner’s spy show Alias. You might recall that Plame was once a CIA agent outed in a column by Robert Novak. Her campaign promo has her stunt driving in New Mexico and talking about her career as a spy.

In her announcement video she also explicitly mentions some Ukrainian-Jewish ancestry. This was likely done to make up for her 2017 controversy in retweeting columns by Philip Giraldi. Giraldi is known for harsh criticisms of Israel and American foreign policy.

Plame releasing a video where she talks about being a spy and part Jewish is perfectly timed. Jewish spies are a trendy subject matter.

A new book about the life of American journalist David Karr, The Millionaire Was a Soviet Mole, reveals that Karr was Zelig-like, and allegedly the model for How to Succeed in Business Without Really Trying. During a 1970s trip to Moscow, Karr was recruited by the KGB. Karr’s motivations and role in the greater world of intelligence remain murky. In this, he resembled his friend Armand Hammer; the two traveled together to Moscow, and it was likely on one of their trips that Karr was recruited.

According to one ex–KGB officer, Karr provided the Soviets with assessments of American political leaders and economic issues. Karr was responsible for arranging the back channel through which the Soviets communicated with Ted Kennedy. In a 1969 letter to his mother, Karr wrote, “I’ve been on a number of secret missions for our Israeli friends which worked well.”

A new film depicting a man falsely accused of being a Jewish spy is Roman Polanski’s An Officer and a Spy. It’s a retelling of the famous Dreyfus Affair in which French military officer Alfred Dreyfus was accused of being a spy for the German army. The wrongful conviction of Dreyfus is what convinced Theodor Herzl that Jews would never get a fair shake in Europe and that their return to the homeland was the only remedy. The history of Zionism turns on the accusation of a spy.

A miniseries about a genuine spy was released recently through Netflix. Sacha Baron Cohen’s new show is simply titled The Spy. It is the true story of Mossad agent Eli Cohen. In the early ’60s, Cohen went undercover as Kamel Amin Thaabet in Syria. He began networking with military and government personnel and fed the information back to Israel.

“The profound legacy of Jewish spies has its beginnings in the Old Testament.”

This blackmail technique Cohen used against the rich and powerful recalls the accusation that Jeffrey Epstein was possibly working for Mossad. Attorney Alexander Acosta said he cut Epstein a sweet plea deal because he was told Epstein “belonged to intelligence” and to leave him alone.

Epstein’s possible connection to Mossad is tied to that of Robert Maxwell. Maxwell was the father of Epstein’s girlfriend Ghislaine Maxwell. Coincidentally, Robert Maxwell, Jeffrey Epstein, and David Karr all died mysterious deaths. Maxwell was also the inspiration for a Bond villain. He was given a funeral in Israel that further betrayed his possible ties to intelligence.

On 10 November 1991, Maxwell’s funeral took place on the Mount of Olives Har Zeitim in Jerusalem, across from the Temple Mount. It had all the trappings of a state occasion, attended by the country’s government and opposition leaders. No fewer than six serving and former heads of the Israeli intelligence community listened as Prime Minister Yitzhak Shamir eulogized: “He has done more for Israel than can today be said” (‘Gideon’s Spies: The Secret History of the Mossad,’ St. Martin’s Press, 1999).

The profound legacy of Jewish spies has its beginnings in the Old Testament. There is the story of the twelve spies that Moses sent out. There is Rahab’s keeping of a safe house, and the story of Hushai, the friend of King David, considered by the CIA to be the first example of an influence agent in history. King David is on the run after his son Absalom usurps the throne. David’s best political adviser, Ahitophel, has defected to Absalom and is now advising him. To counteract this, David sends Hushai back to Absalom to pretend to also be a defector. Hushai gathers intelligence on Absalom’s plans and foils the advice of Ahitophel. David regroups and eventually takes back the throne from his son, and is saved by the spy Hushai.

The reasoning and motivations for becoming a spy are many. Sometimes they are not understood even by the spies themselves. The conservative British journalist Malcolm Muggeridge was a spy for England during World War II. He said that traitor Kim Philby was a leftist, but then in his experience so were most of the wartime MI6 personnel. He believed Philby’s tipping point for going to the Soviets was due more to financial than ideological pressure. “He liked to have money and spend freely.” Of course, the money you make spying is tax-free.

David Karr’s sister touched on another theme. She said her brother possessed an “uncanny yearning to be an insider because he was an outsider.” That’s something I’m sure the great Israeli spy Zohan could relate to.

Let’s not overthink the motivations too much. As Valerie Plame’s commercial makes clear, being a spy looks fun.