Jimmy Savile: Emblem of an Age 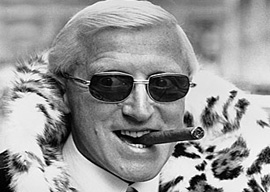 On New Year’s Day 1964, a louche, longhaired Leeds lad presented the first edition of the BBC’s Top of the Pops from inside a converted Manchester church. Featured acts included The Beatles, The Rolling Stones, and Dusty Springfield. The Leeds lad would later claim it was the dawn of the discotheque”making him an avatar of the Age of Aquarius and an elder statesman of the new egalitarianism.

All through the 1970s and 80s his hobgoblin physiognomy could be frequently seen on TOTP, grinning and gurning amid girls around whose soft shoulders he draped companionable arms. His clutching hands were festooned with chunky gold. His body”whenever it could be seen clear of the galaxy of girls”was usually clad in repulsive tracksuits in an eye-watering array of pinks, purples, and aquamarines, with hubcap-sized medallions cascading down inside his unbuttoned shirt. Even by the 70s” sartorial standards, it was obvious Jimmy Savile was not outfitted from Savile Row.

The same contrived carelessness was displayed on his hugely popular Saturday evening show called Jim”ll Fix It, in which he granted children their fondest wishes”anything from flying a plane to seeing the New York Christmas lights to dancing with some renowned terpsichorean. “Now then, now then, guys and gals,” Savile would say, and little boys dying of leukemia were visited by some famous footballer, the highpoint of their short and stricken lives. It was hard not to feel a lump in the throat and kindly disposed toward the cheeky chappie whose researchers had facilitated the event.

“Savile was a Neanderthal in the guise of a modern”but then in a way we all are.”

He often told us that he devoted most of his free time to cuddling chemotherapy kiddies and mixing it up with the mad and bad. He had privileged access to children’s homes, hospitals, hospices, and even Broadmoor Hospital, home to troubled souls such as Peter Sutcliffe, the “Yorkshire Ripper.” (There is a celebrated photo of Savile, Sutcliffe, and the boxer Frank Bruno.) Savile practically “ran the place,” he bragged, and he was even given his own room and set of keys.

The miner’s son with the ridiculous hair had few obvious talents, but thanks to his working-class credentials, tough single-mindedness, and ostentatious selflessness, he managed to surf all social waves. He was knighted by the Queen and the Pope, was admitted to the Athenaeum, and was fought over to front advertisements. Streets and buildings were named after him, and he was a patron of charities, a recipient of honorary doctorates, and a generic goodwill ambassador. He even carried marriage guidance messages between Charles and Di, and he spent eleven successive New Year’s Eves with Margaret Thatcher.

When he turned out the studio lights at the end of the final edition of TOTP in 2006, for many watchers it was as if part of their youth had died with the lights. When he died, his funeral was at Leeds Cathedral, and he was buried at his stipulated 45-degree angle in Scarborough Cemetery so he could “see the sea””albeit through the concrete coffin-case designed “as a security measure.” A suitably vulgar black granite headstone was erected, bearing the legend “It was good while it lasted!”