John Wayne Did Nothing Wrong 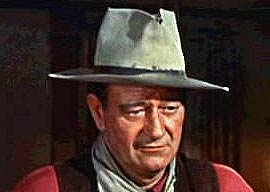 I was born in 1961 and from my dim memories of TV fare in the 1960s, there were only two races in America: cowboys and Indians. Of the 30 top-rated TV shows in 1961 and 1962, a robust seven of them were westerns. The top three were all westerns: Wagon Train, Bonanza, and Gunsmoke. Not a single show back then featured black actors as regulars. It wouldn’t be until 1965 that a novelty coon named Bill Cosby became the first black featured actor on a TV show, starring as Robert Culp’s sidekick on I Spy. Otherwise, blacks were essentially nonexistent on TV—sort of how Hispanics are today.

America as portrayed in western films and TV shows was one of expansion, of conquering the frontier, of unapologetic pride and heroism. And no one epitomized the noble cowboy more than John Wayne.

America in 2019 is a place of concession, of erasing the borders, of unbridled apologies, and endless prostration. Naturally, this makes John Wayne a target.

Jesus fuck, John Wayne was a straight up piece of shit

Watch your language there, Pilgrim, and show some respect. The only question about what would happen if you were placed in between cowboys and Comanches is which group would slay you first.

The usual suspects quickly gathered in formation and began squeaking and squalling and shrieking and bawling and self-mutilating and administering one another crack-laced enemas over the idea that anyone—even someone born in 1907—could utter such things without being lynched or necklaced or at least scalped until he either died or repented.

Here are some of the comments from their interview that their fragile hummingbird hearts aflutter. I’m quoting a lot simply because there was a lot of gold in them thar hills:

The academic community has developed certain tests that determine whether the blacks are sufficiently equipped scholastically. But some blacks have tried to force the issue and enter college when they haven’t passed the tests and don’t have the requisite background.

I believe in white supremacy until the blacks are educated to a point of responsibility. I don’t believe in giving authority and positions of leadership and judgment to irresponsible people.

“America in 2019 is a place of concession, of erasing the borders, of unbridled apologies, and endless prostration. Naturally, this makes John Wayne a target.”

Our so-called stealing of this country from them [Indians] was just a matter of survival. There were great numbers of people who needed new land, and the Indians were selfishly trying to keep it for themselves.

I don’t feel guilty about the fact that five or 10 generations ago these people were slaves….Now, I’m not condoning slavery. It’s just a fact of life, like the kid who gets infantile paralysis and has to wear braces so he can’t play football with the rest of us.

I will say this, though: I think any black who can compete with a white today can get a better break than a white man. I wish they’d tell me where in the world they have it better than right here in America.

I’d like to know why well-educated idiots keep apologizing for lazy and complaining people who think the world owes them a living. I’d like to know why they make excuses for cowards who spit in the faces of the police and then run behind the judicial sob sisters. I can’t understand these people who carry placards to save the life of some criminal, yet have no thought for the innocent victim.

Giddy-up! That’s quite a saddle bag to unpack, especially since it brings up ideas that I’ve been clobbering you over the head with for years:

• Blacks have it better in America than they do in any majority-black nation on this big blue marble. I’ve been urging people to contradict me on this point for a quarter-century and all anyone has done in response is call me bad names.

• Affirmative action favors academically qualified blacks over everyone else. For example, at Princeton as of 2015, blacks receive a 230-point handicap on the SATs compared to whites; compared to Asians, they get a 280-point bonus.

• Feeling guilt over anything that happened five or ten generations before you were born is a fool’s errand.

• Positions of authority should not be allotted to incompetent boobs merely because you pity their ancestors.

I challenge anyone to toss aside their silk slippers and silver tiara and attempt to explain what is factually or logically inconsistent about any of Wayne’s comments.

Then again, we aren’t dealing with rational people; we’re dealing with religious thinkers to whom whiteness and maleness are evil pestilences.

In Exodus 34:13, God instructs the Israelites, who were performing an ancient version of Manifest Destiny, to occupy the land of their natural enemies and demolish everything that’s sacred to the Amorites, Canaanites, Hittites, Perizzites, Hivites and Jebusites:

But ye shall destroy their altars, break their images, and cut down their groves.

For all the flak that former American icons get about being colonists who destroyed culture, that’s exactly what’s happening to former American icons now under the smelly clenched fist of multicultural globalism. Every attempt to erase the memory of someone whose opinions were mainstream a mere 50 or 100 years ago simply because they had no problem being white or male is a method of destroying altars, breaking images, and cutting down groves.

It’s what’s happening with Confederate monuments all through the South, and now it’s happening with John Wayne Airport in Orange County, CA, which features a nine-foot bronze statue of the Duke. The brouhaha over Wayne’s Playboy comments led Pulitzer Prize-winning columnist Michael Hiltzik to solemnly declare:

It’s time to take John Wayne’s name off the Orange County airport….Orange County today is such an economically and ethnically diverse community that it’s hard to justify asking any member of that community to board planes at an airport named after an outspoken racist and homophobe, with his strutting statue occupying a central niche in front of the concourse.

Note that there are no similar movements to rename any streets or monuments to FDR, who once declared in a moment of race-realist candor:

You and I, Burt, are old English and Dutch stock. We know who our ancestors are. We know there is no Jewish blood in our veins, but a lot of these people do not know whether there is Jewish blood in their veins or not.

Nor is there any clarion call from major media to abolish the endlessly silly homage to Che Guevara, who uttered:

The first person we hit on was the mayor, someone called Cohen; we had heard a lot about him, that he was Jewish as far as money was concerned but a good sort….

The black is indolent and a dreamer; spending his meager wage on frivolity or drink; the European has a tradition of work and saving, which has pursued him as far as this corner of America and drives him to advance himself, even independently of his own individual aspirations.

Take a look at any picture of John Wayne and compare it to photos of any of his critics, and it will immediately be evident who was heroic and who is a mere submissive altar boy dutifully carrying water for modern pieties.

If there are any images to be destroyed, it should not be bronze statues of John Wayne or mountain carvings of Confederate heroes. It should be anything that’s sacred to the egalitotalitarian lunatics who think John Wayne did anything wrong