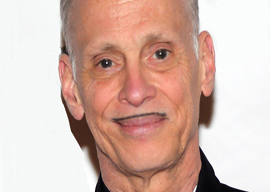 Filmmaker John Waters is one of those weather-vane celebs whom conservatives celebrate when they point in roughly the right direction.

For instance, and ironically, I”m writing this the day the inventor of the rainbow flag died, and the very gay Waters has expressed a bemused hostility to such mass-market queer iconography, along with “camp“ (“Two older queens talking about Rita Hayworth under a Tiffany’s lampshade”).

Andrew Breitbart, in fact, was a lifelong fan of Waters. When they met, though, on Bill Maher’s show, it went badly“for Breitbart (which is saying something; admirers have blotted out just how crap the late conservative hero’s media appearances frequently were).

So, for instance, Waters was widely quoted postelection for saying:

I hate liberals who say: “I”m leaving the country.” Oh, like it’s going to matter. You”re not that important, go ahead.

Not every outlet included the sentence that followed””But the only thing I can think that’s positive is that a new kind of anarchy is going to happen next””which is too bad, because I happen to agree, but Waters and I may define “anarchy” differently. At least, these days…

“I kept hearing that Multiple Maniacs sent up its era’s radical left. This I had to see.”

In high school, I saw his cult movie Polyester at the Broadway just like the other local weirdos. But when I moved to the big city, I met scarily cool people who had seen (and even owned!) the older Pink Flamingos, Desperate Living, and Female Trouble. I quickly and quietly caught up on Waters” “trash” oeuvre via Suspect Video. While I was never able to completely get past his actors” of-its-era hairiness, these movies were absurdist fun, with their proto-punk sensibility and mock-mental-hygiene dialogue (“The world of heterosexuals is a sick and boring life!“).

Affection for the man dubbed “the Pope of Trash” by no less a personage than William S. Burroughs was compulsory in hip circles.

Longtime fans who”d sat sanguinely through Divine chowing down on an actual dog turd literally recoiled (believe me, I was there) when Waters” Hairspray and Cry-Baby broke through to the mainstream. Where had these wholesome, upbeat, pastel demi-musicals come from?! Sure, the heroes were still outsiders, but they were glossily embodied by real actors, not Waters” Dreamlander stable of fellow Baltimore freaks.

Around the same time, his first books Shock Value and Crackpot came out, and I came to respect him more (with reservations; he’s since outgrown his juvenile obsession with murderers, but back then was still parroting Genet’s pernicious “crime is beauty” bunkum). Like those of his fellow indie impresarios Roger Corman and William Castle”who”d also crafted cultured, avuncular public personae”Waters” stories about making his movies were far more endearing and entertaining than the finished products.

And that’s the John Waters the “straight world” has known best for most of this century: the New York Times best-selling author, and brains behind a Tony-winning Broadway musical that gets put on in high schools; the dapper, ever-pleasant yet ever-so-slightly edgy afternoon-talk-show guest; hell, he even staged a G-rated table read of Pink Flamingos with children (and without the puppy poo part).

Some aging artists, having thus risen from low- to middlebrow, would stomp down “rediscoveries” of their back catalog, but not Waters. Anyhow, few filmmakers could resist overtures from Criterion to restore and release a chunk of their obscure juvenilia. And so, 1969’s Multiple Maniacs (a.k.a. The One With the Giant Lobster Rape) is finally on DVD.

Which means Waters is on yet another press junket, patiently repeating highly polished drollery: The black-and-white flick, made for five grand borrowed from his parents, and formerly marred by ugly splices, now looks as crisp and pristine as “a bad John Cassavetes movie”; “The first comment I got when [the restored Multiple Maniacs] premiered was “That acid must”ve been good then””and it was.”

Now, at this point in my life, I normally wouldn”t care. But I kept hearing that Multiple Maniacs sent up not just the usual low-value targets”square, suburban families and blustering authority figures”but also its era’s radical left. One minor character was a Weatherman! This I had to see.

And, well, it was just okay. No, I wasn”t that shocked by the drawn-out “rosary job” sequence; it was obviously a zany nod to Pasolini, and only slightly more profane than the sick fantasies of your average precocious Catholic kid.