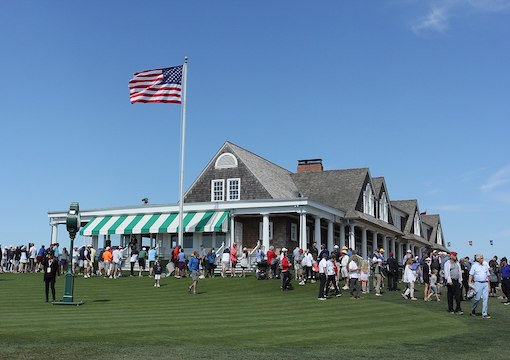 SOUTHAMPTON, L.I.—These are peripatetic times for the poor little Greek boy, out in the Hamptons for some sun-seeking among WASP types, and then down to the nation’s capital for the memorial service of that wonderful humorist P.J. O’Rourke. And do take the following with a grain of salt, but even 800 million years ago, when only microorganisms slithered around the beaches, belonging to a private club was all-important, especially in the Hamptons. Never have I seen more chest-thumping, bandy-legged, bearded louts trash-talking while polluting the beaches in this beautiful town. Southampton was once a luminous little village that served as a seaside refuge for New York’s civilized rich during the unbearable heat of urban summer. You know the kind, white wooden houses, long green lawns, wicker chairs, yellow-and-white umbrellas, and people who talked in what was known as Park Avenue lockjaw. Back then belonging to a private club was pure snobbism. Now it’s a lifesaver. The barbarians have overrun the place, putting up Hollywood-type monstrosities on the wide acres that once grew potatoes and driving prices through the roof. Staying at an old club that’s been around for a century and that I joined long ago made my days and nights. No one among the members used the ubiquitous f-word, and better yet, no mobile telephones are allowed within the common rooms and terraces, making the place feel like Tahiti when Paul Gauguin was around. A long weekend there restored my spirits, despite a night of debauch followed by a hangover that would have been too much even for a Karamazov. Never mind. A sense of claustrophobic delirium takes over after a while in the Bagel, the light and shadow of the city summoning memories of being banged up. A long weekend by the sea is what the doctor always orders, and this time it really worked.

America has become a strange country to people like myself who believe in myths. No one in Europe disputes who our progenitors were in the manner young know-it-alls in America do. “Who were the pioneers?” they ask rhetorically. It’s the kind of question posed by left-wing smart alecks and ignoramuses out to divide and rule. According to the great classical historian Taki, people of different races and backgrounds, with different histories and customs, are all prescriptions for disaster, except that it used to work in America. No longer. Keep your old customs and beliefs, is the order of the day. America’s past, according to woke, was racist, hence conformity to Americana is a no-no. The Founding Fathers are the first to fall, along with their statues. History in Europe pretty much goes unchallenged. Not so over here, where it is being rewritten while statues are torn down and places renamed.

“Back then belonging to a private club was pure snobbism. Now it’s a lifesaver.”

Mind you, political polarization is not new. It helped bring Hitler to power, not to mention Mussolini, Franco, Lenin, and Mao. In South America strongmen were the norm, as they are in present-day Africa. The reason the U.K. and U.S. have always been democratic is that authoritarians have never been given free rein. What is presently tolerated, however, is a new type of tyrant, the spin dictators who marginalize opponents using woke stormtroopers and cancellation, rather than the water cannon and baton. These woke tyrants have managed to intimidate and subvert educators, journalists, TV media, Hollywood, and politicians, something only Hitler and Stalin managed in their lifetime.

Will this woke anarcho-tyranny against Middle America succeed, or will it end up in the historical rubbish dump where it belongs? The great Greek classical historian thinks that the germ has spread among the young, and a basic abhorrence for anyone who doesn’t agree with them will grow exponentially until only a few old fools will be allowed to speak their minds, mostly among themselves. And while I’m at it, can any of you envision Winston Churchill or Harold Macmillan being interviewed by a woman dressed in gym clothes calling him a liar? Boris should have gotten up and ordered the slag out. When will my side learn not to give in to lefty scum?

Never mind. Perhaps things aren’t as bad as all that, but the fact that since the Texas massacre of children there have been two mass shootings a day in the United States makes one feel that the place is as safe and united as the West Bank. The mayor of the Bagel recently named a gun violence czar to stop gun violence, and the appointed czar has a conviction of first-degree manslaughter in 1988, and also of receiving 26.6 million big ones in city funding for an outreach program, along with a charge of “grave financial irregularities.” He is the city’s hope to stop the shooting, a bit like yours truly appointed liquor and drug czar for London—not a bad idea, incidentally.

Insane demands by each minority group, including “believe all women” and “defund the police,” help make the U.S. ungovernable. Two million new faces in sixteen months is a headline that caught my eye, and it confirms the fact that America has lost control of its borders. Which brings me back to where I started. Private clubs will become safe havens sooner rather than later, and the ones with modern defensive weapons will be the most sought-after.