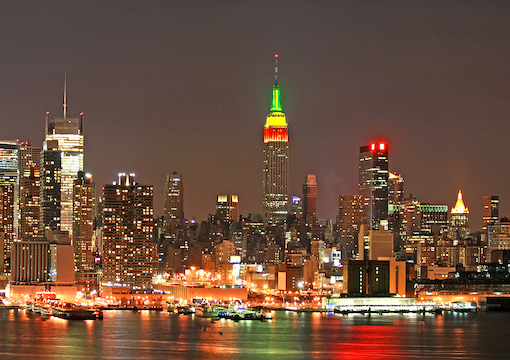 NEW YORK—Christmas partying, like Yule shopping displays, begins much earlier of late. After the lockdown, however, the urge to party and party hard is justified. Like others, I am trying to make up for the missing two years, but the hangover toll is prohibitive. It now takes a whole two days to feel normal again, and at this point in my life, days count as much as months used to.

Last week I hit a hot new club here on the Bagel’s Upper East Side, Casa Cruz, owned by Juan Santa Cruz, who also happens to be a Speccie reader. Juan was sitting at the table next to mine with some pretty girls and a couple of young men that I knew when they were still in short pants. Alessandro Santo Domingo and the newly married John Michael Radziwill, next to his very nice Polish wife, greeted me and were solicitous. The reason for their concern was that the first course had yet to arrive and the old boy was already gone. The problem was that my dining companions, Prince Pavlos of Greece and Arki (Romeo) Busson, were late to arrive and only did so as I was finishing my third double vodka on the rocks on an empty stomach after a violent karate session.

“This is the way it should be: two very top clubs targeting the same clientele, the way the Stork and El Morocco used to back when New York still had a society to speak of.”

Mind you, I was in the club’s roof garden on a balmy evening looking out at the housetops of Madison Avenue that I had mistaken for a trompe l’oeil, and complimenting the waiters for the art, until more sober opinions set me straight. The club is on six floors and is quite amazing, but it will soon have competition because Robin Birley has permission to open his nightclub exactly one block away from my humble abode. This is the way it should be: two very top clubs targeting the same clientele, the way the Stork and El Morocco used to back when New York still had a society to speak of. I will tell you more about Robin’s club when it opens next year—and if I’m still around, that is.

Once Pavlos and Arki arrived, the vodka kept flowing, and after dinner I struggled to go down a couple of floors to another great room full of—well, yes, women, including Siena Miller, who was friendly and not at all Hollywood. Disaster struck soon after. Balance is the first to go, and I knew I was in trouble when I attempted to take a few steps. My group had disappeared by then, a wise thing to do because no one wants to be debriefed for hours by some nosy cop as to where they were and what they were doing while the old boy expired in their midst.

I’m exaggerating, of course, because I don’t plan to meet with the man in the white suit anytime soon. What I want to do is return to the subject of clubs, and the lack of the right people to fill them. By this I don’t mean Silicon Valley slobs and hedgies who are pretentious and pompous and give themselves airs, like so many of these barbarian nouveaux zillionaires we read about. The perfect example of a slob whom people took very seriously, especially among Wall Street types and the media, is Sam Bankman-Fried, the Ponzi-scheme wunderkind who recently sat on a dais with Tony Blair and Bill Clinton in suits while he was in filthy shorts and a T-shirt. Personally I am convinced that Bankman-Fried is a super Madoff, a much bigger con man and crook, and he was the second-biggest Democrat donor after Soros. (With other people’s money.)

Even worse, Bankman-Fried was a big shot at Davos and a World Economic Forum partner. He pledged to give 1 billion smackers to the Democratic Party, so everyone loved him in the media. I’ll bet my bottom dollar—I’ve never dealt in crypto because of crooks like him—that he’s got lotsa moola stashed away in the Bahamas, while the billions that have disappeared will be forgotten because the crook was such a lefty.

I bring this filth up because there are so many of his kind around nowadays, the ones who worship wealth and act in a superior manner, the exact opposite of those young men I was with during my drunken evening. John Michael Radziwill and Alessandro Santo Domingo were born very well-off, but you’d never know it by their attitude toward others. That’s because their parents, like mine, taught them early on how fortunate they were, and how to respect those who were not as lucky. It’s very simple, my dear Watsons: Everything starts at home, and if yours is in Silicon Valley, you’re bound to be in la merde, as they say in the land of cheese.

Exclusion, needless to say, is what makes an exclusive club, but those who are excluded nowadays are mostly nice, unglamorous, and unobtrusive people. My unsolicited advice to both bosses of the new clubs is to bar celebrities, except serious actresses like la Miller, and anyone with an entourage. Billionaires need to be screened and given a handbook of old-fashioned manners on how to act in public spaces. Most sports stars should be excluded, even the great and gentlemanly Roger Federer because he might bring in Anna Wintour. Women who join by themselves should be the type one takes home to mother. They’re boring but safe. Tarts are great fun, but I’d exclude them simply because they tend to get into fights late at night and mess things up.