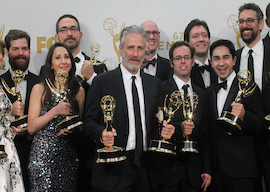 They hiss and shout “Boo!” at Thomas Jefferson and Andrew Jackson for owning slaves, but now liberals are turning on presidents as recent as Bill Clinton. In the modern Democratic Party you either die a hero or live long enough to see yourself become part of the problem.

Jon Stewart, the former host of The Daily Show, was not long ago the liberal hero. In a decade that saw Air America fail, he was the closest liberals ever came to their own Rush Limbaugh. The media thought the 2006 midterm election that brought Democrats the House owed much of its success to both Stewart and Stephen Colbert. Rolling Stone unveiled its “The Millennial 100” listicle last week, documenting the events that shaped millennials, and it put Stewart near the top.

And yet, for all his influence on the way young people view politics and the media today, Stewart’s relevancy is dissipating. He ditched The Daily Show to retire to his farm in the summer of 2015, ironically at the moment when the Trump Train got going, but anyone who caught his Daily Show in the years before retirement could tell he had become bored. Toward the end he resembled a real-life Krusty the Clown in his bitterness and contempt for the audience of children he was required to mug for in exchange for clapter.

In a way, Stewart was a victim of liberalism’s success, and when he and the left achieved the victories they wanted so badly in the 2000s, they had no idea what was supposed to happen next. They were like Robert Redford’s character in the final scene of The Candidate, when, moments after winning a Senate race, he privately asks his consultant, “What do we do now?” For Stewart in particular, as a satirist with a nihilistic bent, the postcoital tristesse that comes with personal and political victory was inevitable.

“For all his influence on the way young people view politics and the media today, Stewart’s relevancy is dissipating.”

Of course, a win doesn’t come without consequences: A post-Christian America would mean a nastier Republican Party. In a word: Trump. A diminishing white population would start to act like just another resentful minority group. In essence, Stewart’s liberalism of the mid-2000s (remember when “Bush = Hitler”?) became dated with the success of Obama.

Liberalism’s new goals would be less favorable to Stewart: Occupy Wall Street doesn’t sound great when your brother is a Wall Street banker. The demand for talk-show hosts who aren’t white guys must make you cringe when you are not only a white guy, but an old white guy. What’s worse, the talk-show format itself began to resemble Pee-wee’s Playhouse.

By the left’s post-2013 standards, Stewart had a race problem, a woman problem, and a diversity problem. As soon as his reign was over, Stewart’s kingdom would divide among former Daily Show correspondents.

What now for Stewart? Last week he asked the media to self-criticize their role in creating Trump.

“I think the journalists have taken it personally,” Stewart said. “They’re personally wounded and offended by this man. He baits them and they dive in, and what he’s done well, I thought, is appeal to their own narcissism, to their own ego.”

Stewart, like Trump, is a kind of master at playing the media, and specifically at getting the media to play themselves. The media’s desire to cosplay Woodward and Bernstein, to see themselves as hero-reporters, was used against them in Trump’s election. Members of the media view themselves as an unofficial branch of government, as our de facto leaders, and Stewart is saying that Trump brought that conceit out of them in their personal feuds.

Like left-wing satirists before him, Jon Stewart undermined civility in his country by portraying anyone who was genuinely conservative as a menacing buffoon. It accelerated the process of turning politics into a spectator sport, with groups such as Antifa being the equivalent of English soccer hooligans looking to get into street fights after the game. Once you’ve stoked people’s hatred to win an election or to draw ratings, it’s difficult to put that hatred back into the bottle.

The Weimar Republic’s Kurt Tucholsky and Karl Kraus both shared similar roles in tearing down pre-Nazi Germany through satire before becoming horrified at what was replacing it.

From Eric Hoffer’s In Our Time:

In a Western democracy the adversary intellectual is not only against his country and against the middle class into which he was born, but he sides with the colored races against the white, with animals against man, and with the wilderness against the sown. Predictably, an adversary intellectual who is a Jew sides with the Arabs against Israel. Is this hatred of one’s own a variant of self-hatred? Hardly so. One who hates what most people love probably savors his uniqueness. He believes that secession from his country, class, race and species bespeaks righteousness and partakes of the heroic. But above all he has an almost insane vanity. The adversary intellectual feels superior to the people who govern his country, but he will not run for office. He will not demean himself to beg the votes of stupid people. He lusts instead for an apocalyptic denouement that will topple the power structure and give him his chance. The adversary intellectual cannot actually wreck a society, and he cannot seize power. But by discrediting and besmirching a society he undermines the faith of its potential defenders. When the Tucholskys had done their work, Weimar Germany could not defend itself against the wreckers—the communists and the Nazis.

We seem to be watching, as it was called in the days of network television, a rerun.