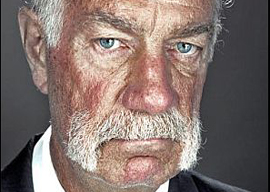 Canada wouldn’t let Terry Jones into the country last week, and you’re thinking: “Who can blame them? He was the least funny Python.”

But I’m talking about the Reverend Terry Jones of Koran-burning infamy.

So now you’re going, “Even better. What a jackhole.”

Except you’d hope Canadian border-control policy was based upon something other than subjective calculations of jackholery.

Officially, the authorities can deny entry based on “criminal record, health or security issues.” In practice, however, their decisions don’t even rise to the already low bureaucratic standard one might call the whimsically arbitrary.

Despite having employed plenty of Canadians (and paid millions in taxes) over the years, Lord Conrad Black needed a special permit to move back after doing time in a US prison. (The “temporary” part was a particularly sadistic poke, I thought.)

“Canada used to be the last ‘stop’ on the Underground Railroad. Now we railroad people to keep them out.”

But if you’re newly sprung from Gitmo, having murdered an American medic and called planting roadside bombs “the proudest moment of your life,” then it’s “welcome back, Khadr.”

What about Hamas sympathizer and noted feline impersonator George Galloway? It took a couple of tries, but he finally got into Canada (then hinted he’d like to punch the Minister for Immigration).

But are you a “controversial academic” with “contentious views on Islam”? Forget it.

What about pundit Ann Coulter? You’ll get a written warning to watch what you say north of the 49th parallel. Then cops will shrug that they can’t guarantee your safety when students riot outside your venue, forcing you to cancel your talk.

Maybe it’s all those ZOG checks in my Grand Cayman account talking, but I detect a pattern. One with lots of crescent shapes.

(My conspiracy theory isn’t 100% sound, but the main reason Muslim extremists get to give speeches in Canada is that they already live here.)

On October 11, Terry Jones was to debate a local imam on the lawns of Queen’s Park, the provincial legislature. Holding debates out of doors on dark October evenings is not some quaint Canadian custom; organizers had been turned down by every other venue they approached. And besides, Queen’s Park is the scene of the crime.

That is, the “crime” of walking a dog on public property.