Jordan’s Influx of the Unwanted 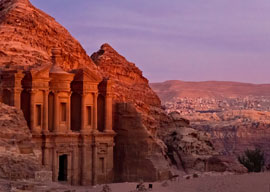 Few Westerners could locate Jordan on a map. If they think about it at all, it likely concerns Queen Noor, the glamorous wife of former King Hussein. So why should anyone bother knowing anything about Jordan?

First and foremost, Jordan has almost no petroleum. This may astound Westerners fed a diet of “dependency on Middle Eastern oil,” but Jordan is as oil-reliant as anywhere else (perhaps slightly less so, as they purchase from their kinfolk).

Second, Jordanians must walk a fine line in a region already known for being on the razor’s edge. They remained neutral during the first Iraq War. Their action was taken out of no great love of Saddam, but for sheer survival.

“Jordan has become the hapless dumping ground of excess humanity throughout the Arab world.”

Desirous of Arab solidarity while minimizing local American presence and with a well-trained but under-resourced military, Jordanians must be both deft and clever while navigating the region’s multitudinous cross-currents. Thus far, they have succeeded.

Third, and the reason any of this matters, is that Jordan has become the hapless dumping ground of excess humanity throughout the Arab world. During the 1947 war in Palestine multitudes fled to their neighbor, and it happened again during the 1967 war. Today there are between 2.5 and 4 million Palestinians in Jordan, around half the nation of only 6.5 million people.

Obviously, when a swarm of bodies enters a territory, tensions arise over employment, social services, water, and food. While most Palestinians have Jordanian citizenship, they are underrepresented in government.

There are charges of discrimination at all levels and a system of quotas exists to protect places in universities and elsewhere for native Jordanians. Amnesty International has been critical of Jordan’s treatment of Palestinians, though they fail to suggest any real estate to which these people might be transplanted.

Palestinians’ “right of return” is a major issue in Israeli peace negotiations for this very reason. Jordanians have spent decades carrying a burden that geography has placed on them.

And then there are the Iraqi refugees. As of 2003 Jordanian officials estimated that 450,000 refugees of the second Iraq War were in Jordan. Many are unable or unwilling to return to their homeland.